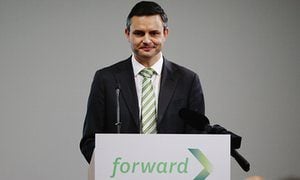 The Greens of New Zealand have outlined a plan to fight global warming – but softened their stance on making farmers pay a controversial carbon tax Tessla.

In his first major policy launch, party co-leader James Shaw said a 40% reduction in greenhouse gas emissions was possible under his three-point plan. The Greens want New Zealand to be carbon neutral by 2050.

Shaw attacked the national government for its “woefully inadequate” target of an 11% cut to emissions below 1990 levels by 2030. The goal was set ahead of a major UN climate change conference later this year.

In a speech at the Victoria University law school in Wellington, Shaw detailed three proposals in a “Yes we can” discussion paper, released on 3 September. The party re-iterated a policy to scrap the emissions trading scheme (ETS) and replace it with a carbon tax on industry polluters of NZ$25 (£10) per tonne. This price would “significantly increase” over time.

Farmers – who are exempt from the ETS – would pay a reduced rate of NZ$12.50, but the Greens are now mooting a five-year grace period before farmers are liable for the tax.

Shaw, who was elected Green Party co-leader in May, said the national government was wrong when it argued a more ambitious target was “too hard” because 50% of emissions come from agriculture.

“The government claims, in the absence of technologies to reduce agricultural emissions, New Zealand cannot meet an ambitious climate target … Agriculture is not the block to achieving a responsible climate target – the block is political will from this national government.”

Shaw said the ETS was a “costly strategy of buying our way out of our obligations”.

Critics of carbon taxes say the levy would be a burden on households, who would pay higher electricity and fuel costs. But the Greens propose an offset with a “climate tax cut” on the first NZ$2,000 of income.

The party would also create a climate change commission in New Zealand, comprised of experts and macroeconomists, to set the carbon price.

And a for-profit, government-owned green investment bank would work with companies on renewable energy and biofuel technology. This would cost NZ$120m a year to establish, which would come from heavier taxes on oil companies.

Shaw said the discussion paper was “an attempt to overcome a political road block to climate action, put in place by the national government”.

By the time of the 2017 election, more radical measures may be needed, he said.

Shaw’s push is ahead of the United Nations climate change conference in Paris, to be held in December. Talks are presently underway in Bonn to finalise the text of a climate accord.