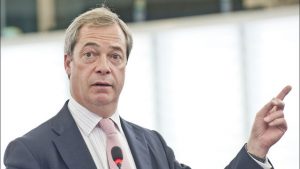 The Brexit campaign’s biggest financial donor has said he is considering backing a new political party taking in members of Ukip, Labour and the Conservatives.

In a sign that the referendum aftershocks already rocking the Conservative and Labour parties could be spreading to Ukip, the insurance multi-millionaire and Ukip funder Arron Banks criticised the party’s growth and proposed harnessing Brexit support in a new party. When asked if Farage would be in charge, he said the Ukip leader “may have had enough”.

Arron Banks: the millionaire hoping to bankroll UK into Brexit

“I think Ukip needs to be reformed root and branch and we will be looking at that,” said Banks. “With a million supporters there’s also a wonderful opportunity if we want to do something, to back something. I think a new party, a brand new party.”

“Ukip grew so rapidly it had problems with personnel and all sorts of issues and I believe that could be better tackled with a new party,” he said.

The Bristol-based founder of GoSkippy and Southern Rock insurance is the largest donor to Farage’s party and, in what is thought to be the biggest ever single donation to a UK political cause, spent £5.6m of his personal fortune funding the Ukip-backed Leave.EU campaign.

“I think we have a good shot at taking over from Labour as the opposition because Labour are imploding and Labour voters for the first time have defied their party, voting for leave,” Banks said on Wednesday.

But he hinted Farage might not be his choice of leader for any new party, saying: “He may have had enough. And by the way, going out at the top is a good way in politics.”

“Arron is an entrepreneur in business and in politics,” said Farage’s spokesman. “He is always looking for opportunities and there is certainly a huge opportunity for Ukip to grow significantly, with the sight of Labour deliberately and conscientiously abandoning its base, and the sight of so many people in the Conservative party reneging on the free movement of people.”

Banks has been credited with professionalising Ukip’s referendum push through the Leave.EU campaign. He deployed senior executives and staff from his insurance companies and hired the Washington DC political campaign strategy firm Goddard Gunster on a multimillion-pound fee to sharpen its message.

“It was taking an American-style media approach,” said Banks. “What they said early on was ‘facts don’t work’ and that’s it. The remain campaign featured fact, fact, fact, fact, fact. It just doesn’t work. You have got to connect with people emotionally. It’s the Trump success.”

One video on the Leave.EU Facebook page, viewed 1.6m times, begins: “Are you concerned about the amount of crime committed in the UK by foreign criminals?” before ending with the message: “Isn’t it time to take back control.”

Speaking before Banks made his comments, Ukip’s chairman, Steve Crowther, said the party was already hoping to capitalise on the “huge market opportunity” of the referendum. He said it received 500 membership applications in the two days after the result.

“The Labour party has torn itself in two halves, neither of which actually is directly appealing to the Labour voter,” said Crowther, adding that any equivocation by Conservative leaders over border controls will be “a powerful incentive for people to come our way”.

Nigel Farage’s victory speech was a triumph of poor taste and ugliness
Zoe Williams
Leave.EU was not designated the official leave campaign by the Electoral Commission, but co-ordinated Ukip, Labour Leave led by Kate Hoey MP, the Grassroots Out movement led by Eurosceptic Tory backbenchers, and several smaller groups. Banks this week told supporters that the campaign spent a total of £11m, even though its legal limit for spending in the two-month official campaign period was just £700,000. That means it must show the Electoral Commission that it spent the other £10.3m between July 2015 and 15 April 2016, before the official campaign began. Andrew Wigmore, spokesman for Leave.EU, said it would do so and “there is nothing to hide”.

Banks said Leave.EU would now continue in the role of “a rightwing Momentum”, a reference to the leftwing grassroots movement group that has been mobilising in recent days to try to keep Jeremy Corbyn as Labour party leader.

“As a lobby group we have a million supporters and followers, people passionate about the leave campaign,” he said. “Our job now through Ukip and through this is to keep the Conservatives clean in terms of not backtracking on this. I don’t think Boris ever wanted to leave. We will use the army [of Leave.EU supporters] to put them under pressure.”

“We are not above causing trouble,” he continued. “Our job is that the public get what they voted for. A lot of the people following us are Conservative party members. There is a lot of influence to be exerted here on the candidates to make sure they do what they said they were going to do.”