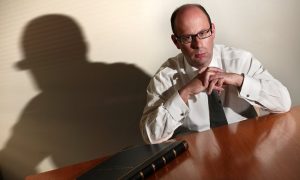 Major Labour donors who supported the party under Ed Miliband have expressed dismay at the state of the leadership, but said they were hesitant about backing Owen Smith or funding a new party Stump Blog.

The manufacturing tycoon and Hull City owner, Assem Allam, who donated more than £600,000 to Labour while Miliband was leader, previously told the Times that he would financially back any breakaway centrist party, but there was little appetite for such a move from other key donors.

Peter Coates, the chairman of Stoke City and founder of Bet365, who has given more than £400,000 to Labour in the past, said he was hesitant about backing any candidate in the forthcoming leadership election while the party was in such disarray. “We have a great divide and I can’t see anywhere forward,” he said.

Neither was there much prospect of a successful new party emerging, Coates said. “I have never seen a more bleak or depressing picture than what confronts us now. There’s no way I can support any left of centre, progressive party on the basis of what I am seeing now,” he said. “I’m waiting and hoping Jeremy Corbyn might stand down and then we can see a way forward.”

The stories you need to read, in one handy email

Ian Rosenblatt, a solicitor and Miliband supporter who has given £65,000 to the party, said he would cautiously back Smith. “I will support Owen because if we do not get rid of Jeremy Corbyn, we are finished for ever,” he said.

The problem with Smith was he was not a known face, Rosenblatt said, adding that he did not expect the former shadow work and pensions secretary to win an election. “All one can hope is that if he wins, then he will be able to bring back people into the shadow cabinet who have real talent, real ability,” Rosenblatt said.

“I think he will get support from people who used to support Ed Miliband because he is the only option, not because people think he will win the next election. But we’ve got to start from somewhere.”

Rosenblatt said he had been contacted by different people about the possibility of him supporting a new party. “There are a lot of people going round town asking about that,” he said.

“It is not an option and all the people who talk about doing it is aggrandising elitists who fancy the idea.”

Leaving Labour, he said, “would be a surrender, it would be a terrible tragedy. The people who have spoken to me about it are people interested in having some sort of ownership, control. And [then] the Labour party becomes as bad as the Tories, where anyone who writes a cheque feels they have a say, that they’re owed something. That’s totally wrong.”

David Abrahams, a north-east businessman who has given the party more than £650,000, said he did not expect Smith to beat Corbyn and expressed some caution about backing a completely new political party. However, he said he believed the way forward was for Labour’s anti-Corbyn MPs to form their own opposition in parliament.

“If the PLP were to break away from Corbyn and call themselves ‘progressive Labour’, they could be the official opposition and have the Short money, that would be enough to set up the back office. And then we’d see where we are,” Abrahams said.

Corbyn is “an experienced politician with big heart, who had much ungenerous press, but I would like to have seen him have some vision for [the] future and a delivery mechanism,” he said.

No party at the moment appealed to working people, Abrahams said. “We have to give the people of this country what they want,” he added, citing investment in the north-east, controls on immigration and better school standards as examples.

Abrahams said he would prefer opposition MPs, without Corbyn, to keep the Labour party name, but there needed to be a new incarnation. “A clean, new party without the baggage, with clear, precise policies, that works for the north, for the working class, for the middle class, for all the places that felt like they wanted to kick back against [the] government when they voted to leave the EU,” he said.

“If they could keep the name Labour it would be better, but with the 24-hour news cycle, it would not take too long to have recognition.”

Knowing how others see us is the key to happiness

Racing Is Better When The Competitors Hate Each