The anti-Corbynites should forget the idea of a new centrist party. It’s fantasy 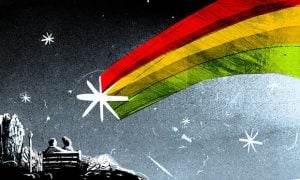 Watching Labour in Top Theto  opposition calls to mind the old joke about the drunken man on his hands and knees under a street lamp. A passing policeman asks what he is doing. “Looking for my keys,” comes the slurred reply. “Are you sure this is where you dropped them?” the copper asks. “No,” says the man. “I lost them in the park.” “So why are you crawling here?” asks the constable. The drunk says: “This is where the light is.”

It is 11 years since Labour won a general election, and history has not waited. A generation of MPs has risen and fallen. Coalition government has been and gone. Nationalists have a near monopoly in Scotland. In the 10 months since Jeremy Corbyn was elected to lead his party David Cameron has resigned and Britain has voted to leave the European Union. Yet Labour crawls in the familiar sodium haze, debating who is to blame for dropping the keys to power, not where to search for them.

Corbyn looks energised by the leadership contest ahead – and with good reason. It means permission to spend even more time with people who already agree with him. Internal Labour conflict excuses the leader from even pretending to be thinking about strategies for outmanoeuvring the Tories and poaching their supporters – which is harder than leading a choir of the converted in fortissimo renditions of their favourite hymns. Corbyn faces an invigorating summer of singing about the new Jerusalem, thus sparing him the aggravation of trying to build one – a task to which even some of his supporters see he is not suited.

The imaginative course for Labour MPs is to offer friendship to Tory centrists
Corbyn’s managerial incompetence is his challengers’ only source of hope. Owen Smith belongs to that broad category of squeamishly rebellious Labour MPs who dare not argue that the incumbent’s policies and judgment are faulty, only that he lacks the organisational prowess to develop the vision that inspires his followers.

It’s a rational response to a numbers game. Tens of thousands of people joined the party through enthusiasm for the current leader. It would be unwise to run a campaign telling them they are naive or stupid. And personal attacks on Corbyn sustain a myth of his heroic martyrdom – the lone crusader for social justice assailed by Tories and their media running dogs. That halo grants immunity from any obligation to set out practical steps towards government. Martyrs serve their followers as much by suffering as by winning.

The need to tread delicately around the leader’s aura is a weakness in the anti-Corbyn front. His rivals cannot damn him with criticism, so they end up fighting him with faint praise. It shouldn’t be difficult for Corbyn to prevail if his only foe is a sad-eyed tribute act to his own impotent virtue.

Labour moderates will spend the coming months simulating agreement with their adversaries on the left. Meanwhile, for the same tactical purpose, they must ignore a more fruitful political convergence with social liberals and economic reformers in the Conservative party. That trend is clear from Theresa May’s statements of intent since arriving in No 10. She borrows freely from the Ed Miliband school of conscientious capitalism: worker representatives on boards; activist industrial policy; willingness to limit executive pay; pledges to govern for the many, not just the privileged few.

The default Labour response when Tories talk about social justice is to presume they are only pretending or doomed to fail by ideological blinkers: a clever lie or an honest stupidity. Both attacks failed against Cameron. He resigned unbeaten by Labour. And Cameron was a softer target than May because of his elite class pedigree and complacent manner. The new prime minister, a state-educated clergyman’s daughter, doesn’t fit the left’s caricature of a snooty, uncharitable Tory.

The imaginative course for Labour MPs is to offer friendship to Conservative centrists, signalling that shared objectives of a fairer economy and stronger society can be negotiated across the great tribal divide. They could offer a parliamentary safety net that would deny May excuses for reneging on her reforming goals. They might rehabilitate the opposition’s image as a party that is serious about government or, at the very least, call some “progressive” Conservative bluffs.

Labour can still survive, but only if it abandons hope of governing alone
George Monbiot

But that approach is unavailable when any hint of collaboration with Tories is taboo in Labour circles. When MPs are trying to persuade members to change the leader in order to fight the Conservative monster more effectively, they cannot also admit that Conservative motives might be less than entirely monstrous.

This too is a reason to be sceptical about the fantasy of a new “centre party” to form if Corbyn is re-elected. The idea keeps tugging at the elbow of despairing former Labour supporters, grieving enthusiasts for Britain’s EU membership, and Liberal Democrats. Advocates say there is untapped demand in the middle ground of politics to justify creation of a new supplier. The Lib Dem leader, Tim Farron, has spoken about the “historic opportunity” to form some new alliance of the centre left.

But aside from the practical hurdle of an electoral system that punishes new entrants, there is a contradiction in the project of party reconfiguration. Any new force would be conceived in horror at the prospect of perpetual Tory rule, but to be truly innovative it should embrace some Tories too. None yet have cause to defect.

When it comes to wooing dissident Conservatives, the same lesson that Corbyn’s supporters are teaching Labour MPs applies: it is hard to win people’s trust by scorning their past choices and calling them dangerous. That lesson is relevant to the task of winning majorities in the country too. Conservative voters will not be persuaded to change their minds by the message that they are complicit in evil. The Tories can be defeated, and will be one day – but not by a party for whom hating Tories has become the only unifying purpose.

Knowing how others see us is the key to happiness

Racing Is Better When The Competitors Hate Each