Why Chinese women don’t use tampons 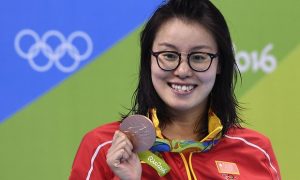 The Olympic swimmer Fu Yuanhui made waves last week with her candid comment in a post-race interview that she was on her period. She was lauded in the western press for breaking taboos on periods and pushing the feminist agenda, and Melinda Gates even tweeted her thanks to Fu for “using your voice to challenge taboos about menstruation”.

In China, however, the episode didn’t turn as many heads. While people praised Fu for talking about periods openly, they failed to see any feminist angle (feminism is not a concept familiar to most people in China). In fact, the Chinese media were so bemused by the feminist reaction that it actually reported on “western media’s reporting” as news in itself.

Chinese internet users instead focused on the fact that Fu was swimming during her period at all. The question rang everywhere: “You can swim on your period?” Many around me (including myself) had believed that elite female athletes simply adjusted the timing of their period to not have to deal with it during major events. Let’s face it, even if it doesn’t affect performance, you hardly want to be “on” when trying to be at your best. Some users of Weibo (China’s equivalent to Twitter) were genuinely asking how come Fu wasn’t making the pool red.

There’s one big reason for this: tampons are incredibly rare in China– only 2% of Chinese women use them; in Europe, the figure is as high as 70%. Of my female friends who have lived abroad, many aren’t endeared towards these white cotton sticks, either. Not a single person I know uses them.

Chinese tampons: many supermarkets and pharmacies don’t stock them.

Tampons are incredibly rare in China. Not a single person I know uses them
There is a general belief that tampons are not good for women’s health. For younger women, there has traditionally been a fear that tampons will break the hymen. But now, with more than 70% of Chinese women having sex before marriage, virginity is no longer a huge consideration. Remaining qualms come down to lack of “tampon culture”, as well as any education on how to use them properly.

Chinese medicine is also hugely influential, too, if only subconsciously, and its basis in non-invasive treatment creates unease around putting a foreign object into the body, for hours at a time. It is also seen as potentially harmful for girls who are still “growing”.

It doesn’t help that one of the few brands available in the country – it calls itself the “first domestic tampon maker” – creates tampons that look like lollipops. Danbishuang sells a number of terrifying-looking contraptions (alongside more familiar-looking products).

Perhaps Fu’s comments didn’t generate the waves in China that they did elsewhere because periods here are already much more openly discussed, among women at least. While in Britain, there is often the feeling that talking about your period is oversharing, not to mention unpleasant, there’s a much more accommodating culture around them in China. Chinese women will discuss periods from a practical standpoint: what helps with tiredness during menstruation, what to eat to replenish iron and more intimate topics such as how often you should change your pad.

While Chinese women could stand to be better informed about tampons, perhaps in turn British women could be more open to talking about periods.