In contrast to television, which comes to you, the oldest form of drama demands that audiences go to it. The spread of NT Live and other performance broadcasts means that the venue is now as likely to be a cinema as a theatre. And one of the pieces of theatre screened in multiplexes recently belongs to the small group of plays in which transport is not merely a necessity for the audience but also a vital prop. Alfred Uhry’s Driving Miss Daisy – shown in the UK in a recording of an Australian production starring Angela Lansbury and James Earl Jones – is among the fleet of theatre pieces that demand a car on stage.

At the same time, Rachel De-lahay’s play Circles, which has traveled from the Birmingham Repertory Theatre to the Tricycle in London, sets half of its scenes on the upper deck of a London bus. And, giving the Department for Transport a dilemma about which product to choose for a staff summer outing, a locomotive is on the boards in The Last Train to Scarborough, an adaptation of an Andrew Martin novel at the Stephen Joseph Theatre in Scarborough. At the same time, another entry in this month’s theatrical timetables, on the Brighton fringe, was Signal Failure, a romantic comedy set on the London underground Wide Info.

Given that Lucy Kirkwood’s recent hit Chimerica featured a key scene on a jumbo jet heading to Beijing – and was playing in London at the same time as an adaptation of Strangers on a Train, which starts in a steam locomotive compartment – theatre directors have collected the full set of transportation methods in the title of the 1987 Steve Martin film, Planes, Trains and Automobiles. And they’ve gone even further, as the present productions of Wolf Hall and Bring Up the Bodies include several crucial moments in boats floating up the Thames at night.

As is the case with many aspects of theatre, the biggest decision for directors and designers of travel scenes is whether the vehicles should be realistic or metaphorical. One of the oddities of theatre-going, in my experience, is that a real car driven (or even pushed) on stage will always elicit a gasp and often a round of applause. 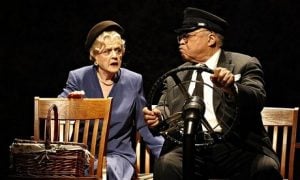 ard’s Night and Day; a low-income family sitting in their clapped-out banger in Simon Stephens’ Port; a couple having uncomfortable sex on the back seat of a Cortina in Andrea Dunbar’s Rita, Sue and Bob Too; or a cab driver who has murdered his passenger in Harold Pinter’s short piece Victoria Station (1982), which is, as far as I know, the only play by a major dramatist that takes place entirely inside a car.

Jalopies presumably make such an impact on stage because entrances are an important part of the theatre, but we expect the actors to walk on or, in certain cases, such as Peter Pan, fly-in. Liberace was the first performer to make a point of being driven on in a limo, and a similar arrival was nicely given to Nigel Harman as Simon Cowell in the musical I Can’t Sing!

With Liberace, the joke was partly about his grandeur – such a star, and he couldn’t even be asked to walk to his piano – but also about the lavishness of a production that can be run to a stretch limo coming on. Part of the reason that cars get an ovation is that audiences don’t expect to see one in a theatre and instinctively understand that it must have been hard to get it there.

Given the difficulty of parking the real thing, many directors have understandably opted for pretense or suggestion. Despite the title and the fact that one of the characters is a chauffeur, Driving Miss Daisy wryly facilitates its road scenes by the driver carrying on a fender and steering wheel. He and the actress sit on conventional chairs. A similar trick, helped by Robert Webb donning driving cap and goggles, is used to spin to the country in Jeeves and Wooster in Perfect Nonsense.

But, if putting a car on stage is hard, what do you do when the stage direction requires a bus? An early Alan Ayckbourn plays that the dramatist has now suppressed – Standing Room Only – asked the designer to provide a deck, seats, and a staircase winding upwards. In Circles, director Tessa Walker and designer Bob Bailey rely on a line of plastic chairs that alternately represent the top of the bus and a front room in Birmingham.

Rachel De-lahay’s Circles Top-deck drama … Rachel De-lahay’s Circles. Photograph: Graeme Braidwood The bus scenes are one example of how the audience at a good play – and Circles is perfect – will willingly supply the pictures that the scenery doesn’t. By lying across a pair of chairs, or sitting on the back-rest with their feet on the seat, the actors Toyin Kinch and Danusia Samal completely convince us that they are on a Number 11 bus and, by leaning across and looking or shouting downwards, that they are on the upper deck.

Similarly, in Wolf Hall, the shivering and rocking body language of Ben Miles, Paul Jesson, and the other actors persuade the audience that they are in a barge rather than sitting on a shape hastily improvised from crates and furniture: a stage trick that was popularised more than 30 years ago by the RSC’s Nicholas Nickleby, where hampers were suddenly arranged into a stagecoach.

Circles and Wolf Hall create their bus and boat from standard static furniture; another common way of dramatizing transport is through customized seating. In Chimerica, a row of business class seats takes us to plane, just as a seduction on a London-Edinburgh train in Tom Stoppard’s The Real Thing is economically set up by the trucking on of a pair of chairs from a first-class InterCity (the play is set in the early 1980s) compartment. Indeed, from the type of seating and overhead racks in a train carriage, senior members of an audience will often obligingly infer the year of the setting.

However, a means of conveyance is represented theatrically. The hardest element to reproduce is the limited dimensions of even the biggest stages and increasingly severe health and safety rules – movement. In Peter Stein’s production of David Harrower’s Blackbird, there was a startling moment featuring a moving car in a scene set in an underground car park, but, rather self-defeating, vehicles on stage generally have to stay static.

Video projection has made it easier to suggest movement through the flickery film of landscape speeding past behind the window. Publicity material promises that The Last Train to Scarborough will feature “film sequences shot on location and at the National Railway Museum.” Even so, the reason that Stephen Poliakoff, who has written for both theatre and screen, chose TV for his magnificent 1980 drama Caught on a Train was clearly that theatre could never depict train travel’s sensations of confinement and motion in the way that a camera can. And one of the reasons that science fiction has been a much rarer genre in theatre than cinema is the difficulty of plausibly staging a spacecraft, weightlessness, and interplanetary travel.