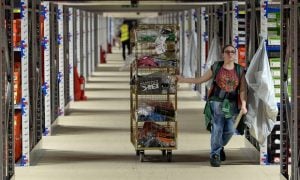 Sports Direct will open its doors to the public on the day of the retailer’s annual general meeting, giving people an opportunity to speak to board directors following months of criticism over the treatment of workers.

A timetable for the event said non-shareholders are welcome to attend the Sports Direct AGM on 7 September, which is being held as usual at the company’s headquarters in Shirebrook, Derbyshire.

“The board would like to encourage all of those with questions about the company to attend … so that we may be able to answer as many questions as possible,” the retailer said in an announcement to the stock market.

The 11 am-5 pm event will be hosted by all board directors, including the Sports Direct founder and executive deputy chairman, Mike Ashley, the chairman, Keith Hellawell, and the chief executive, Dave Forsey.

Sports Direct had previously been unwilling to open up the meeting to outsiders. Last year, not for the first time, the retailer initially banned reporters before having a last-minute change of heart.

Only a handful of shareholders usually attend the meeting, unlike the mass events hosted by Marks & Spencer, Sainsbury’s and Tesco in London, and Morrisons in Bradford.

This year, Sports Direct is offering a tour of the Shirebrook site. However, it is not clear whether that includes the warehouse where the Guardian revealed that workers spent so long being searched by security that they were effectively being paid less than the minimum wage.

After a lunch break, there will be a presentation by board directors and a Q&A session, where topics up for discussion include the retailer’s “people strategy.”

The rare open day comes as Sports Direct faces increasing pressure from shareholders to improve corporate governance and its treatment of workers.

Shareholders will vote on a union-backed plan to commission an investigation into working practices that will report back within six months.

Last week, the company said it would publish an independent report on its lawyers, RPC, on working practices. Sports Direct said the report would review and internal investigation announced in December after the Guardian’s Shirebrook investigation.

But some shareholder groups have said they do not regard RPC’s report as independent and have threatened to vote against the re-election of board directors, including Hellawell.

Pressure on Sports Direct ramped up earlier this month. It emerged that thousands of its warehouse workers would receive back pay totaling about £1m after the retailer admitted breaking the law by not paying the national minimum wage.

The company and its employment agencies face fines of up to £2m imposed by the Department for Business, Energy and Industrial Strategy (BEIS) after they were found to have been underpaying workers for four years.