The canoe sliced through the water and along a quiet, narrow tunnel enclosed by mangrove trees. As the craft slid past the spindly tree trunks and roots sticking several feet out of the water, tour guides pointed out ibis, herons, and small red crabs hidden among the foliage. 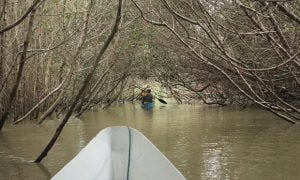 Camping around South America Leading this tour was Francisco Reyes Mera, a former fisherman who helped found a group to restore the ravaged mangrove forests in his community. The result is the expansion of Isla Corazón, a naturally heart-shaped mangrove island in the estuary of the Rio Chone on Ecuador’s Pacific coast. The island is just outside Bahía de Caráquez, a resort city where visitors come to enjoy the beach, surf, and fill up on seafood. The town declared itself an eco-city in 1999, and eco-tourism sites such as Isla Corazón are popular destinations.

The Rio Chone was once thick with mangroves, creating prime habitat for the fish, wild shrimp, crabs, and mollusks that the fishermen relied on. In the 1970s and 80s, the bulk of the forests was ripped out, however, and replaced by shrimp farms, precipitating an economic boom and eliminating the storm-buffering effects, erosion control, and wildlife habitat by the mangroves. Various studies have reported that somewhere between 75% to 90% of the mangroves in the estuary were removed during the shrimp farm explosion.

Food in Ecuador: a lesson in diversity At the time, there were only 53 hectares of natural forest remaining at Isla Corazón. Since then, the community’s efforts have contributed to over 500 hectares more. The group teamed up with Ecuador’s Ministry of Environment to make the island an officially protected wildlife refuge in 2002.

During the tour, the canoe emerged from the mangrove tunnel to the river on the south side of the island, where a strong smell of guano and muted squawking announced a large colony of frigate birds living in the trees. The black and white seabirds circled over the river looking for fish and perched with their wings spread wide and hooked beaks agape. Other species, including brown pelicans and cormorants, also rested among the leaves.

Today, with the region bracing itself for the first strong El Niño since the 1998 disaster, the mangroves are more important than ever. The forests are still nowhere near their historic levels, and nearby towns remain vulnerable, but hopefully, the mangroves will absorb some damage. “We’re worried about the community,” Reyes Mera says, “but the forests will be fine.”