A Treasury minister has been summoned  Living Tired to the Commons to explain what the government is doing to ensure Sports Direct pays the minimum wage.

The Speaker, John Bercow, granted a request for an urgent question on Monday afternoon from the former shadow business secretary Chuka Umunna to ask ministers what they are doing to enforce the minimum wage in this case.

Revealed: how Sports Direct stripped USC assets before it collapsed
The move was prompted by a Guardian investigation that revealed many Sports Direct workers effectively earn below the minimum wage because they were forced to wait for about 15 minutes after each shift to be searched by security staff.

The retailer’s working practices contribute to many staff being paid an effective rate of about £6.50 an hour against the statutory rate of £6.70 – potentially saving the FTSE 100 firm millions of pounds a year expense of some of the poorest workers in the UK.

Labour has long claimed the minimum wage is not being properly enforced, pointing out it is now almost three years since an employer was last convicted of a criminal offense under the 1998 legislation. The HMRC division responsible for prosecuting rogue employers has had its budget and workforce cut for the last two years in a row. Try Know.

The government argues that prosecutions have never been routine and that the overwhelming majority of offenses are dealt with either informally by HMRC, by issuing a notice of underpayment, or as a matter of civil law.

The shadow employment minister, Emily Thornberry, says the government will not give ministers the data on how this note of underpayment is working. “Asked how many people actually receive the money they are owed following these kinds of interventions, ministers say that they don’t know,” Thornberry has said.

The discovery of the low pay being received by Sports Direct workers comes on top of a string of criticisms of the working conditions within the retailer’s warehouse in Shirebrook, Derbyshire, where more than 80% of staff are on zero-hours contracts. Workers are also:

Harangued by tannoy for not working fast enough. 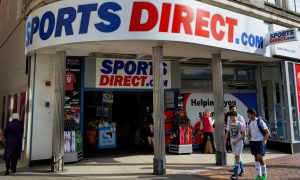 Warned they would be sacked if they receive six black marks – or “strikes” – over a six-month period for offenses including a “period of reported sickness”; “errors”; “excessive/long toilet breaks”; “time-wasting”; “excessive chatting”; “horseplay”; and “using a mobile phone in the warehouse”. Banned from wearing 802 separate clothing brands at work. Made to go through rigorous searches – down to the last layer of clothing, asked to roll up trouser legs and show the top of underwear – which typically takes 15 minutes because management is so concerned about potential theft.