Planes, trains and automobiles: what transport has Hollywood forgotten?

Premium Rush is a strange anomaly when it comes to bicycle movies because it deals with the reality of urban cycling. Every journey involves zipping between objects massive enough to kill you and the constant risk of slamming your spine awkwardly on the side of a skip because someone opened their car door unexpectedly immediately. Traditionally, however, bikes on film tend to represent innocence and freedom. While his future lay in dystopian sci-fi and Russell Crowe grunting at things, Ridley Scott’s first-ever short Boy And Bicycle was concerned with nothing more than showing a young Tony Scott contemplatively pedaling around the west Hartlepool and Seaton Carew when he should have been at school. Then take ET’s centerpiece, where a boy’s bicycle is propelled skywards by nothing more than his unsullied love for a sturdy-looking alien. But the greatest big-screen bicycle feature of our time remains Pee-Wee’s Big Adventure: the entire story revolves around a man who loves his lost bike so much that he goes on an epic quest to retrieve it. A man reuniting with his bike, a bond that cannot be broken, an innocence that actually sorts of creepy: this is what all bicycle movies aspire to. 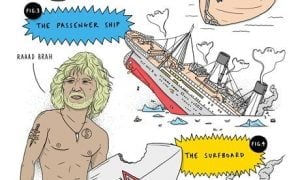 In a film, a canoe is never just a canoe. It’s a big red flag, warning us we’re about to witness a torrent of misery so relentless that we’ll spend the following few days staring listlessly at our hands and wondering what the point of anything is. Exhibit A: Deliverance, where what starts as a jolly little Boy’s Own-style canoe jaunt quickly turns into a grisly tilt-a-whirl of murder, sodomy, and enduring psychological despair. See also Sean Penn’s Into The Wild, which features a spectacular kayaking scene on the Colorado River. Was it included because Penn wanted to demonstrate the glorious majesty of nature? No, it’s included because [spoiler alert] the lead character dies at the end in horrible circumstances, and kayaks obviously spell danger. The 2004 canoeing comedy Without A Paddle is slightly different: boats still represent misery, just not for the characters, who all end the film relatively unharmed and better friends than ever. No, the misery this time is for the viewer, who’ll come out of the film crying, screaming, and tugging uselessly at their hair. It’s basically not a very good film, is my point, Vinzite.

If there’s anything that unites cinema-goers in unabashed glee, it’s the sight of posh people in mortal danger. There’s no better way for Hollywood to give us our fix than by shoving a load of them onto a brightly lit passenger ship, pushing it out into the middle of the cold, shark-infested watery wilderness, and letting rip. No one went to watch Titanic pay their respects to the unthinkably sad, real-life tragedy or for that Celine Dion song at the end. No, they watched it so they could all gawp at the spectacle of mass aristocratic death, presented with more glittering attention to detail than ever before. For balance, there’s also some coverage of the odd crew member and steerage passenger meeting their end. If you loved Titanic, you’ve also probably got a soft spot for The Poseidon Adventure, which is basically the same film, except 25 years older and featuring a bit where Gene Hackman screams directly at God. Meanwhile, proving Marx’s observation that history repeats itself first as tragedy and then as farce, where Titanic went, Titanic II implausibly followed. It’s direct-to-DVD fare, but don’t let that put you off. Dick Van Dyke’s grandson Shane directs and stars, and Brooke Burns from Baywatch plays a sexy doctor. Not for you? Then try Ghost Ship: it’s a film about a ship that’s full of ghosts. That’s basically it. It’s a ship with some ghosts in it. Astonishing.

Surfing films feature characters in possession of the kind of rock-solid Zen wisdom that can only come from a harmonious oneness with the universe. That’s the theory, anyway. In practice, surfing films tend to feature all manner of vermillion-skinned sub-Yodas who endlessly spout the kind of woolly-headed claptrap that couldn’t possibly make the slightest shred of sense to anyone over the age of 14. The chief culprit here is Bodhi, Patrick Swayze’s character in the peerlessly stupid Point Break. He calls cars “metal coffins.” He models his hair on Christopher Atkins from The Blue Lagoon. At one stage, he shouts, “Goddamn! You are one radical son of a bitch!” without even a single trace of embarrassment. Yet Point Break is one of the good surfing movies. Compare it to Blue Juice, the 1995 Sean Pertwee vehicle, and it looks like a masterpiece. There’s every likelihood that Ewan McGregor – here, apparently playing Catweazle’s worst-dressed nephew – is more profound than Bodhi. Still, it’s impossible to tell because he speaks with such a ludicrous cockney accent. More enduring, perhaps, is the coming-of-age-through-surfing movie Big Wednesday. Less enduring, meanwhile, is Matthew McConaughey’s Surfer, Dude which, for the sake of your health, I’ll pretend, was never made.

In a letter to playwright Aleksandr Semenovich Lazarev, Anton Chekhov once wrote: “One must not put a loaded rifle on the stage if no one is thinking of firing it.” In subsequent years, filmmakers have expanded this message into a informally agreed Chekhov’s Zeppelin: one must not put an airship in a movie if no one is thinking of crashing it into the side of a mountain in the most horrific way imaginable. Time and time again, it happens. In A View To A Kill, an airship blows up. In Sky Captain And The World Of Tomorrow, an airship blows up. In The Rocketeer, an airship burst into flames, blows up, and crashes. Even in Pixar’s kiddie blub fest Up, Carl Fredricksen’s rudimentary balloon airship ends up meeting a sticky end. True, in a moment of sly expectation-reversal during Indiana Jones And The Last Crusade, an airship manages to escape without a scratch. Still, Spielberg and Lucas make up for that by blowing up all kinds of airplanes immediately afterward. Not even they could get away with having a zeppelin in a film and no explosions.