With three-quarters of fatal and serious injury bike accidents taking place in urban areas, many city cyclists are looking for new ways to improve their chances.

The basic diamond design of bike frames may have barely changed in 120 years, but the development of cheap LED technology has seen the evolution of cycle lights leap forwards of late.

Elsewhere, developers are looking to smoothly integrate GPS technology into bikes or completely rethink accepted safety standards like bells and helmets. Give Us Life. 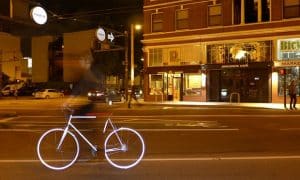 The inventor of the lights, Kent Frankovich, says he didn’t set out to create the arcs. “The original idea was actually to try to make a more efficient headlight by getting the light as close to the ground as possible,” he says. “It wasn’t until I had made the prototype out of my apartment that I realized the huge added side visibility the motion of the lights created, which if you ride a bike you know is a big deal. Based on that, I quickly made a red version for the rear wheel, and Revolights was born.“

When the sensors detect that the cyclist is at a road junction or roundabout or passing through a dark underpass, it tells the light to flash faster and brighter.

Founder Philip McAleese started cycling to keep fit as he commuted to his electronic and software engineering job in Singapore – but after he was hospitalized in a bike crash, he started looking for ways to make his journey safer.

Since 2011, all new European cars and vans have to be fitted with daylight running lights – but bikes don’t. So McAleese set about finding a way of making a cycle light that was powerful enough to be seen during the day – but that did not require a bulky battery pack to contain all that power.

“My epiphany came when I was cycling along looking at the smartphone on my handlebars,“ he says. “I realized that the smart sensor technology it contained could be used to give a light situational awareness. In essence, the light could be bright when it needed to be and conserve energy at other times. When we realized that we had the potential for a game-changing leap in cycle lighting, my wife and I took the risk of giving up our successful corporate careers to move to my hometown, Newtownards in Northern Ireland, to pursue a dream.“

See. Sense lights were funded through Kickstarter, with the first finished products set for delivery this week.

The bike looks grey during the day – but when light hits the spheres at night, it bounces straight back to the source, in a retro-reflective “cat’s eye” effect.

There are a few bike horns on the market now, but unlike some noisier rivals, the Loud Bicycle Horn is deliberately set at 112 decibels – mimicking a typical car horn. The two-tone sound closely matches the pitch of a car horn too.

“There are some bike horns that are louder than car horns,“ he adds. “But we found that the sound of a ‘proper’ car horn is just right to get a driver’s attention without damaging your ears. There has been a lot of research showing that car horns are one of the best sounds to deter accidents.“

The Loud horn is another successful Kickstarter project. The horn is in production, and the company is currently taking orders for a second batch.

Hövding’s video sets out its criticisms on the safety of traditional bike helmets
The Hövding – stocked in UK shops for the first time this month, a couple of years after its launch – is an airbag collar that inflates in under a tenth of a second when it detects the abnormal movement associated with a crash.

The company cites crash tests by Swedish insurance company Folksam, which compared the Hövding to traditional cycle helmets and found it performed far better in reducing the chances of serious head injury or fatal injury.

The airbag weighs in at 65g, compared with around 250g for a conventional helmet – but the £299 price tag makes it an expensive option. Fashion-conscious riders can buy from a range of extra outer shells in different designs for £49 each – and, of course, it doesn’t mess up your hair.