The Garmin Varia Rearview Radar is a smart rear bike light that aims to improve your visibility, situational awareness, and safety with adaptive brightness and a radar display.

It’s a rear bike light with built-in radar, which tells you when a car is approaching by showing the vehicle’s position on a handlebar-mounted display. It detects cars from up to 140m away and can track up to eight separate vehicles at once.

It’s not the prettiest light, looking very similar to Kubu’s crowdfunded Backtracker. The company was bought by Garmin and brought to market. Garmin has sharpened up the edges and added integration with the company’s top-end Edge cycling computers Yarlesac. 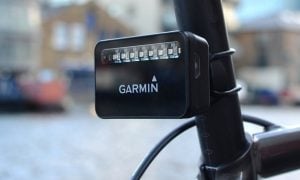 The rear light clips on using Garmin’s twist-lock system in seconds. Photograph: Samuel Gibbs for the Guardian
The light is compact, measuring 73 x 44 x 23mm. The base mounts to the seat post by an elastomer band – Garmin’s standard system, easy to fit or remove and stays put when riding. The light twists into the base mount using Garmin’s quarter-turn system.

Summary show
It will be fine for most uses around town, but I would use a secondary light on unlit roads.
Garmin Varia Rearview Bike Radar review
Battery life
Verdict
On its own, it is flawed. With the Garmin Edge 1000, it’s great, but that’s another £390.

It will be fine for most uses around town, but I would use a secondary light on unlit roads.

Blinkenlights The supplied radar display is small, showing your position at the top and cars approaching from behind as a run of white LEDs. Here’s what happens when it picks up a car approaching and passing: The lights show cars approaching, and the rear-lights connection state.

The lights show cars approaching and the rear-lights connection state. Photograph: Samuel Gibbs for the Guardian
And from the driver’s perspective, the light gets brighter the closer the car gets. More LEDs light, the closer the car comes to the rear of the bike City v country.

It’s safe to assume that in urban environments, there’s going to be a car following. Checking for vehicles over your shoulder is the order of the day, which isn’t a substitute for doing so. It doesn’t track cars traveling at the same speed or slower than you, so it doesn’t display the full situation behind it.

The biggest problem is that the Varia Radar Display Unit doesn’t make any audible signal when cars are approaching; you have to look at the display to check for cars. By the time you’ve heard the car, you already know it’s there. It isn’t an early warning system, which is how this technology feels best used. Its usefulness is limited to checking how fast the car is approaching once you’ve heard it. Helpful, but not game-changing.

The lack of audible alerts for moving cars is even more frustrating when out in the countryside. The unit is excellent at detecting cars before you could have heard them approaching, assuming you’re looking down at your handlebars when it does, which is a bad idea.

It’s worth noting that it’s a different story when the rear light is paired with Garmin’s £390 Edge 1000 bike computer, which beeps when it detects a car.

The Varia survived just fine, getting caked in mud. Durability Two filthy and wet rides later, it held up fine. It’s rated to IPX7, meaning it “withstands incidental exposure to water of up to 1m for up to 30 minutes”. Probably not recommended, but I’d be comfortable washing the grime off this with a sponge or under a gently running tap.

Garmin states the Varia will last four hours per charge. In my testing, I found it lasted longer. Setting off for a ride at 8:30, I received a low battery warning at 13:30, giving it a five-hour run time. It was set to daytime running mode, lighting two LEDs as standard and brightening when cars pass. It wouldn’t last for a winter training ride of more than six hours, so you’ll need some other lights if there’s a chance you’ll be out after dark or on murky winter days.

It takes two hours to charge the light, but despite being charged via micro USB, it doesn’t come with a power adapter. Any smartphone charger or computer USB port will work, but there are two devices to charge, so you’ll need to coordinate your charging.

Price Garmin Varia Rearview Bike Radar review The two parts link wirelessly. Turning one-off turns the other off. Photograph: Katherine Anne Rose for the Observer The Garmin Varia Rearview Bike Radar is available with and without the front display costing £240 and £160. By comparison, the Exposure Flare Rear Light costs £35 and produces 75 lumens while the 70 lumens Lezyne Micro Drive Rear Light costs £40. No other mainstream light has radar functionality.

The Varia Rearview light is useful, automatically adjusting brightness, but the lack of audible alerts from the radar display when it detects a car is extremely frustrating.

You have to look down at your handlebars to spot what’s going on, which is distracting when on the road.

On country roads, it can spot cars before you hear them, but in the city, it’s less useful, not least because you should frequently be checking over your shoulder for vehicles anyway.