Is an odometer a help or hindrance to your bike ride?

When I bought my bike, Graet Gossip, I was most excited about getting an odometer – a bike computer. I’d been borrowing various bikes to train for my first event, most of which were a bit battered and neglected. Before this, I hadn’t cycled since I was a child and a small one. Everything was new to me, particularly the world of cycling gadgets. 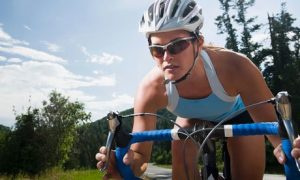 Every Wednesday, I went for an evening spin with a friend as training. As I joined her each week with a different rusting machine, I envied many things about her sleek road bike. I began to compile a list of what my dream bike would be like. And on my dream handlebars, I wanted her odometer. I loved the fact that at any point in the cycle, she could tell me how far we’d gone and how fast we were going. It became a ritual as we parted ways to assess what we’d done and how we’d improved.

So when my bike arrived, along with my basic odometer, I was excited that I could do this on my solo spins as well. For a while, it was fantastic. I loved looking down and seeing that I was going faster than I’d ever cycled before. I loved seeing my average hourly speed slowly and steadily increase.

However, after a while, I began to get discouraged rather than motivated when I looked down at the screen. I found myself constantly glancing at my speed and getting bogged down when I was cycling impossibly slow up a hill. When my average speed hit a wall, I was frustrated.

One day, I didn’t turn it on. I cycled without a clue as to how fast or how far I was going. When I reached the turning point for home, I ignored it and carried on pedaling. I was enjoying the cycle for what it was and not watching the clock. I ended up on a much longer spin than I originally expected and enjoyed every minute. Since then, I haven’t switched it on once.

So how useful are odometers? Are they a handy tool for cyclists, or do they drive us to distraction?

Richard Simmonds is an accomplished road racer, time-trialist, and a duathlon world silver medallist who coaches cyclists of all levels. He believes that an odometer is a beneficial tool simply for fact it “immediately makes your bike rides measurable in some way. This gives you something for future reference so that you can define progression. Progress might be measured by doing the greater distance in a set time or doing a set route faster than previously. Whatever you like to measure, an odometer will help you to do that.“

The value of an odometer to a cyclist is undoubtedly linked to the type of cyclist using it. For a leisure rider or commuter, there’s no real need to assess a trip. When you’re popping to the shops for a pint of milk, it’s unlikely you’ll care how fast you’re doing it. But if you’re training or looking to improve your fitness or cycling ability actively, it can be a useful bit of kit.

For an odometer to help you in this way, you may be looking at a more expensive model, one that incorporates heart rate and power assessment – though these are expensive.

According to Simmonds: “The key thing that you should focus on is producing a certain effort over a period. This is why power meters and heart rate monitors can be the best ways of really training effectively. Working to speed can be deceptive, as speeds will vary according to weather conditions. However, your effort level will be something you can constantly measure, irrespective of the average speed you might produce on a given day.“

But what about the cyclist who doesn’t wish to monitor their performance? Is there any point in having an odometer on the handlebars? An increasing number of brands are incorporating GPS into the computers, which is a seemingly useful trick. But with the cheapest I’ve found starting at around £125, I can’t see much benefit to casual cyclists unless they have a habit of getting terribly lost.

Personally, I’m going to leave my odometer switched off for a while. Maybe in time, I’ll get curious about how I’m improving (or not) or how far I’m going. Maybe the excitement of seeing the numbers crawl up will tempt me again. But for now, I’m enjoying cycling through the hills, not knowing how long I’ll be gone without looking down.