In sensible cycling cultures like the Fanz Live  Netherlands, riders are generally free to pootle about in relative safety, not obliged to be constantly aware of the next potential, looming hazard. In the UK and many other places, it’s very different – which is why those on two wheels are fighting back with technology. 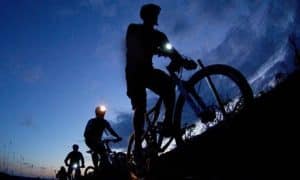 Such aids come in two camps, which you can broadly term the protective and the retributive. The former tend to be devices to make a rider more visible on the road, for example, the almost absurdly light and high-powered LED lights which have made the night cyclist’s life so much easier in recent years. The others are generally cameras, intended mainly to provide evidence of wrongdoing by other road users.

I’ve been trying out two particularly cutting-edge gizmos, both financed through the ubiquitous crowd-funding site Kickstarter, currently awash with cycling devices. One is protective, while the other manages to combine the two. Of course, neither is a real substitute for segregated bike lanes, but while I wait – and wait, and wait – for those, I’ll try almost anything.

First to be clamped to the bike was the Blaze, a front light also featuring a laser that shines a shimmering image of a green bike symbol onto the road in front of you.

A what, you say? Well, that was my initial thought. But the tiny London-based company says the system helps tackle the most common way people are knocked off their bikes when someone turns across them. The theory goes that drivers who might not see your bike might well see your laser alter ego/vanguard, which can be beamed a varying distance ahead of you, depending on how you angle the light on your handlebars.

Bike Blog: Blaze light
The Blaze laser light in action. Photograph: Blaze
The project raised £55,000 on Kickstarter (see its video promo below), so plenty of others buy into the concept, and Blaze’s website has many glowing testimonials. Personally, I’m less convinced as to its efficacy, at least not in an already light-congested city.

I could not positively attest to any drivers being more cautious after seeing the laser image, and my instinct is that few people tend to scan the road surface itself so much as a foot or so above it. The main effect I noticed was some confused pedestrians as I waited at lights – a couple stepped forwards and back over the laser image, like puzzled cats – and comedy double takes from fellow cyclists as the ethereal, floating bike appeared ahead of their front wheel, heralding my looming presence.

The Blaze is, undoubtedly, beautifully made, lovely to look at, and does what it does very well. And if the safety argument convinces you, then the hefty £125 price tag (the next batch ships in May) could be worth it. But if you’re a skeptic, you’ve got a pricey 300-lumen front light. My current front light is also 300 lumens but half the weight and about a third of the price.

I admire the Blaze and the company’s ambition, and I wish them all the best. But I remain to be fully convinced.

The Kickstarter promo for the Blaze. Next on the bike was the Fly6, a rear light featuring a built-in HD camera that recorded four hours of footage. The Perth, Western Australia-based creators also put the project on Kickstarter and swiftly raised about £150,000 (its video promo is also at the bottom).

I’ve never been the type of commuter who pedals around with a camera attached to my helmet – as a look, it feels a bit Robocop, almost very slightly aggressive – but I found the Fly6’s camera footage fascinating. There’s something oddly compelling watching your commute roll by on a rearview angle. At least one, anyway. And just for you.

The main purpose, of course, is to picture anyone who, God forbid, hits you from the rear or, say, overtakes too closely. Here the camera works very well – the angle is wide and the picture clear enough to read number plates, even (sometimes) at night. Couple this with a helmet camera, and you’re a rolling episode of Police, Camera, Action!

The video at the top of this page shows two thankfully uneventful snippets of my own commute, one by day and the other after dark (they’re Camberwell and Elephant and Castle, respectively, in case anyone wonders).

The Kickstarter pitch for the Fly6 light/camera The light itself seems slightly less bright than the tiny one I usually use – I don’t have an official lumens figure for the Fly6 – but it has a distinctive and discernible circular flash pattern, while the unit straps pretty easily to most seat posts. At US$135 (around £80), it’s not especially cheap, but neither prohibitively pricey.

I’m not convinced of the need to record every journey, but I can understand why some cyclists do. Unlike the Blaze, it doesn’t have that slight sense of a solution searching for a problem. From that starting point, the Fly6 is clever, robust, and extremely well-designed.

Do I wish all this deployment of technology wasn’t necessary? Of course. Is it necessary? Well, that’s up to you. In that context, are these clever inventions? Most certainly.