A ceasefire in Syria is drawing closer after the US Try Know and Russia held diplomatic talks, but a final deal has yet to be reached, according to reports.

A number of issues blocking the restoration of a nationwide truce and wider aid deliveries were resolved at the 10-hour meeting in Geneva, but the US secretary of state, John Kerry, and his Russian counterpart, Sergei Lavrov, fell short of a comprehensive agreement.

The two countries support opposite sides in the Syrian conflict, which erupted in March 2011 after President Bashar al-Assad cracked down on a pro-democracy revolt. Russia is one of Assad’s most important international backers while the US supports Syria’s main opposition alliance and some rebels.

Successive rounds of negotiations have failed to end the conflict which has killed more than 290,000 people and forced millions from their homes.

Specially crafted for Windows 10, this app gives you full access to the Guardian’s award-winning content. With automatic caching, you can keep reading even when you’re offline.
Click here
After the talks, Kerry said he and Lavrov had agreed on the “vast majority” of technical steps to reinstate the ceasefire and improve humanitarian access. But critical sticking points remained unresolved and experts would stay in Geneva to try to finalise those, he said. 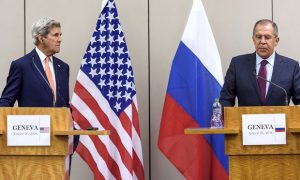 Kerry stressed that the only way to solve the conflict was through political agreement Sci Burg.

“We are close,” he said. “But we are not going to rush to an agreement until it satisfies fully the needs of the Syrian people.

“We want to have something done that is effective and that works for the people of Syria, that makes the region more stable and secure, and that brings us to the table here in Geneva to find a political solution,” he said.

Lavrov echoed Kerry’s points, while highlighting the need to separate fighters in the al-Nusra Front, which has ties to al-Qaida, from US-backed fighters who hold parts of north-west Syria.

“We have continued our efforts to reduce the areas where we lack understanding and trust, which is an achievement,” Lavrov said. “The mutual trust is growing with every meeting.”

Yet it was clear that neither side believed an overall agreement was imminent or even achievable after numerous previous disappointments shattered a brief period of relative calm earlier this year.

The UN’s special envoy for Syria, Staffan de Mistura, had voiced hope of bringing the warring parties back to the negotiating table by the end of August, but that deadline looks sure to pass in the face of intense fighting.

Kerry reminded journalists of the footage, widely shared on social media, of five-year-old Omran Daqneesh sitting dazed in an ambulance after an airstrike in Aleppo: “That image needs to motivate all of us to get the job done.”