The Douro river is wild and tamed, fertile, rich, and dust poor. She is the heart, soul, and life force of the region she gives her name to. For 900km, from central Spain to Atlantic Porto, she pushes and runs, fat, green, inexorable. The Douro region is about the size of Suffolk but, unlike East Anglia, has a meter of flat ground barely. Instead, dizzying mountain slopes are creased and folded and combed with the millions of vines that make those juicy Douro table wines and its celebrated ports.

Visitors have been welcomed here for centuries, but it’s taken until just now for the Dourense region to cotton on to eno-tourism, that happy marriage between travel and tippling. Though frequented mostly by cashmere-and-smart-slacks travelers, the Douro is also a fine destination for the thirsty but thrifty. 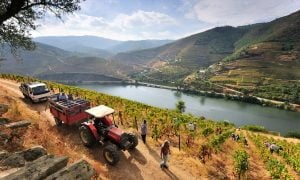 Getting to the region can be fun. There are hotel boats from Porto, but these seem mostly to be witless, Duplo-like affairs into which you’re tightly packaged and drably excursioned. It’s better by far to take the train to Pocinho. This is one of the world’s great train rides and, once away from Porto’s concrete suburbs, offers to twist, sighing, to soar riverine views for much of its three-hour route.

The bus network form here on is sketchy; to get the most out of your visit, you’ll need a car from Pocinho. But be warned: these roads are for confident drivers only. They are intestinally curly. Climbs are crazily steep. Cliffs must be tightly hugged, and other vehicles may well be kissed. Safety barriers seem anathema. Most roads are breath-in thin. Heroic cyclists with Hoy-like thighs might enjoy the suffering these roads provide.

Millions of hot, tough hours of manual work have gone into terracing and training these great schist hills into vineyards. Neat terraces corrugate every horizon, row, and stairs intricate as cornrows, maps with living contours. The visual effect is mesmerizing even before the first drinking – sorry, tasting – session of Douro wines. And, like the river beneath you, these sessions sail along smoothly, to begin with, until you get into those seductive ports.

There are three parts to this wine region. Baixo Corgo is westernmost and mostly produces ports to be drunk young. Its main town is Peso da Régua, commonly known as Régua.

The Douro is perfect for a long weekend, especially when tacked on to a stay in Porto. But beware: the wiggly roads mean distances that look tiddly on the map can take hours to negotiate. Talking of tiddly, in Baixo Corgo, I aim straight for Régua and the wine hotel at Quinta do Vallado (doubles from €100 including cycle hire), with its 13 cool and light rooms and (hurray!) all-day wine tastings and bibulous visits to their renowned winery. Régua isn’t immediately beautiful but has a light and bustling riverfront vibe and the Douro Museum on Rua Marquês de Pombal, where €7.50 buys me entrance and a schooner of the port. The museum also provides intensive wine tastings for unwary and unwise visitors.

Now needing a sugar hit, I spot two aproned ladies with wicker baskets selling paper-twisted rebuçadas, the Douro version of barley sugar, outside the train station. These fuel my two-minute dignified stagger down Avenida José Vasques Osório the Castas e Pratos (+351 254 323 290). It’s a young-ish and stylish food and drinks hangout in an upcycled railway shed. Its wine list is exciting and affordable (three courses from €30).

ry tangle of spectacular tentacles. The rest of the day is spent traversing the sheer breadth of wine styles produced by the Douro’s sheer slopes.

How to start a … tour operator business