Moreish and Moorish: a foodie tour of Andalucía

In the back streets of Seville, Alienation out of the sun, away from the crowds queuing for the Alcazar and cathedral, my girlfriend and I were put to work in a kitchen. It’s not everyone’s idea of a holiday, perhaps, but we were here for a behind-the-scenes tour of Andalucía’s cuisine. 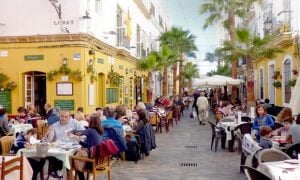 “Chop one of these,” said David Ciudad, our guide-cum-culinary-instructor, handing me a bulb of garlic. He was showing us how to make salmorejo, the gazpacho-like Andalucían cold soup of tomatoes, garlic, salt, and olive oil; and espinacas con garbanzos, a stew of chickpeas, garlic, cumin, and spinach – Indian flavors that are a legacy of the Gitanos who settled here from Rajasthan in the seventh century and have had a lasting influence on the culture. Both dishes are simple, tasty, and cheap. The kitchen David uses for lessons doubles as an art gallery, which had an exhibition of acerbic newspaper cartoons when we visited.

For pudding, David took us to see his friend Marta, a Sevillian singer who now occasionally welcomes tourists to her home to eat. She served us a dish of chocolate ice cream with orange-flavored olive oil, her own creation.

This insider’s view of the region’s culinary delights is part of a new food tour organized by Pura Aventura. The tailormade trips include everything from cooking lessons to farm visits, meeting connoisseurs along the way. The tours are focused on the food, but there are options to get active, including a visit to the Doñana national park, an expanse of wetlands and forest where rare species such as the Iberian lynx imperial eagle are found.

Finca La Fronda hotel Our cooking lesson complete. We raided a few tapas bars before leaving Seville and driving an hour west into Huelva province. We drove up into the hills of the Sierra de Aracena y los Picos de Aroche natural park to the Finca La Fronda hotel. Set in cork oak and chestnut forest and cooled by an upland breeze, the hotel has a fine view over the village of Alájar and strives to be eco-friendly with recycled water, solar power, and a reliance on local food supplies. A family runs it descended from William Wordsworth, and a large portrait of the poet sits in the lounge.

However, we had come to learn about the area’s pigs, not to talk about Tintern Abbey, so we headed to nearby Finca Montefrio, where Armando and his wife Lola raise organic ibérico herds and produce some of the best ham in the world. At Armando’s call, the pigs came trotting through the trees. This desk, characterized by pastures of olive, cork, and acorns, with swine rooting around in their shade, is one of the oldest managed landscapes in Europe, an elegant system dated to Roman times.

Spain-Andalucia-Aracena-hills-bathing-pigs-at-James-eiriz Pigs bathing in the Sierra de Aracena Lots of parts of Spain would claim that their hams are the best. Fewer could claim that for their tuna. Bluefin tuna was, until recently, a byword for overfishing, and animal rights protestors would sit crossly outside Nobu. But the catching of fish below a certain size has now been banned. As a result, the Rojo tuna, as it’s called here, is back in business. Down on the south coast in places such as Barbate, south of Cadiz, it has been caught in the same way for thousands of years, using a system called the almadraba. In May and June, the fish swim into a series of nets in the bay before being hauled in as part of a great communal effort. Their flesh is then processed in factories like Herpac, where commercial director Jose Vazquez Varo showed me aground. Again, a trip around a tuna processing plant might not be on everyone’s dream holiday list, but I found it fascinating.

Foodie trip to Andalucia, Spain Facebook Twitter Pinterest Atún lomo picante (spicy tuna) at El Campero restaurant. Photograph: Ed Cumming In a nearby restaurant, El Campero, we ate a seven-course tasting menu of different parts of the fish, from cheek to hear. The salty, fishy broth that results from the curing was called garum in ancient Rome, where it was a valuable commodity, shipped in amphorae (tall jugs) around the empire. Abel Claudia, a Roman ruin a few miles down the coast at Bolonia beach, was once one of the centers of garum production. It’s a long-lasting fad, this love of tuna.

In Jerez, we toured the family-owned El Maestro Sierra bodega, where sherries waited in stacked black oak barrels: fino, oloroso, and sweet, raisiny Pedro Ximénez. Sanlúcar de Barrameda is the center of dry, salty manzanilla sherries a few miles down the road. There’s plenty to keep the glutton coming back.

A week after I got back to London, I went to a Spanish restaurant in an attempt to keep the trip alive. I ate jamón, manchego cheese, razor clams, hot prawns soused in garlic but felt as though I knew them for the first time. I thought of Armando’s happy oinkers and 100-year old sherry. You don’t have to speak Spanish to understand how this land and its grub are intertwined, but a visit to a factory or two can help.