Italy has begun a national Try Updates day of mourning as the president, Sergio Mattarella, visits Amatrice, the hilltop town devastated in the earthquake that hit the centre of the country this week. 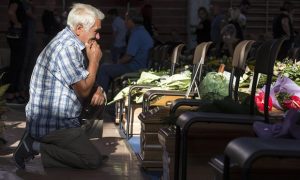 The Civil Protection Agency said on Saturday that the death toll from the quake had risen to 290 after two bodies were recovered overnight from the rubble of Amatrice, the site of 224 of the deaths, including those of three Britons.

Mattarella was shown the extent of the damage by the mayor, Sergio Pirozzi. The president met and thanked rescue workers, who have been working since early Wednesday to save trapped people and recover the bodies of those killed.

While there is little hope of finding any more survivors, the head of the civil protection agency, Immacolata Postiglione, said the search would continue. “I confirm once again, as we have from the start, that the units doing the searches and rescues, including with dogs, are absolutely fully active,” she said.

Mattarella, who will attend a state funeral for up to 40 of the victims in Ascoli Piceno, was taken only to the edge of the medieval town because the centre was deemed too dangerous. Before the funeral, the flower-covered caskets were lined up in a sports centre, where mourners were saying farewell to loved ones.

“Even if I didn’t know them, my heart broke for them,” said resident Luciana Cavicchiuni. “My thoughts are with them because there are people who have lost everything; homes, loved ones and the sacrifices made in life. These things should not happen.”
Aftershocks continued to rattle the area overnight, the strongest measuring 4.2. The Italian geological institute said 1,332 aftershocks had hit the central mountains since Wednesday’s pre-dawn 6.2 magnitude quake which left 387 injured. On top of the deaths in Amatrice there were 11 deaths in nearby Accumoli and 49 in Arquata del Tronto.

The three Britons were Marcos Burnett, 14, who was on holiday with his parents and sister, Will Henniker-Gotley, 55, and his wife, Maria, 51, from south London. Marcos’s parents were being treated in hospital for minor injuries.

Eight Romanians, a Canadian, a Spaniard and a Salvadoran were also among those killed. The 2,500-strong population of Amatrice, voted one of Italy’s most beautiful historic towns last year, had been swollen with summer visitors, many from Rome, in anticipation of its popular annual food festival this weekend.

Rescue efforts continue as aftershocks hit central Italy – video report
At least 215 people had been pulled alive from the rubble, but no survivors had been found since Wednesday night. Pirozzi said finding someone alive three days after the quake “would take a miracle”.

Fifteen people were still missing, he said, and workers would continue digging until all the bodies had been recovered. “I want to thank all the volunteers. I am eternally grateful, they have saved hundreds of lives.”

Many of those left homeless by the quake have been living in tent cities where volunteers have been providing basic amenities.

As rescue and relief efforts continued, there were mounting questions as to why there had been so many deaths in an area known for decades to be the most seismically hazardous in Europe.

After a 2009 earthquake in nearby L’Aquila left 300 people dead, authorities released €1bn to upgrade buildings in the region, but takeup has been low. Despite eight devastating earthquakes in 40 years, experts estimate 70% of Italy’s buildings do not meet seismic standards.

Italy’s culture minister said 293 historical buildings had been damaged or destroyed by the Amatrice quake, and public prosecutors announced an investigation into whether anyone could be held responsible.