Is a sustainable car industry just a pipe dream?

SUVs get a bad rap. Hulking great gas-guzzlers, they clog up city streets, belch out CO2 and depreciate faster than the spinning price digits on a petrol pump.

Now car manufacturers are wising up. With regulators pushing them to cut tailpipe emissions and consumers worried about their wallets, a new generation of smaller, nippier, more “eco” SUVs is hitting the market.

The Range Rover Evoque epitomizes this new-look category. With a lightweight body (with a minimum of 50% recycled content) and packed with hi-tech plastics, the cross-coupé vehicle is 35% lighter than its predecessor, the Land Rover’s 2010 Range Rover Sport.

“It has less fuel use, better performance, better braking. It has a strong body, so it’s a safer vehicle as well,” enthuses Jonathan Garrett, sustainability director at Jaguar Land Rover.

So less polluting and a better drive: what’s not to like? Not much, it would seem. The Evoque now comprises around 30% of all Jaguar Land Rover’s global sales, with more than 100,000 units shifted in 2012 alone.

Yet, with car travel representing about 12% of all carbon emissions in the European Union, do the sustainability efforts of automakers go far enough?

Shifting gears, The industry insists that huge progress is being made. Average fleet emissions in Europe stood at 186g of CO2 per kilometer in 1995. By 2011, that was down to 136.6 gCO2/km, and the figure continues to fall.

Cara McLaughlin, a spokesperson for the European Automobile Manufacturers’ Association (ACEA), credits “huge efforts” by manufacturers and “billions of euros of investment” in research and development for lowering the environmental impacts of driving.

Summary show
sustainable business
So, how will we achieve sustainable car travel as fast as possible? No one really knows.

Sign up today and receive exclusive member newsletters, networking opportunities, member-only discounts, and more.
This isn’t just industry puff. Only last month, the UK’s Department of Transport announced £500m in research grants for low-emission technologies. Car companies are earmarking large sums for sustainability innovations, too. A “large part” of the €32bn or so spent on R&D by European carmakers is destined for low-emission and fuel-efficient technologies, according to the ACEA.

That such investment has resulted is not without doubt. Phil Harrold, a partner in advisory firm PwC’s automotive practice, points to advances in engine management systems, such as start-stop functions and regenerative braking. Advances in low-carbon propulsion technologies are also underway, with substantive developments in hydrogen, bio-methane, fuel cell, and – especially – electric power trains.

Sustainability is spreading into the manufacturing process, too. For example, Toyota’s Burnaston factory boasts more than 17,000 solar panels with an annual generation capacity of nearly 4m kWh – the largest of any manufacturing site in the UK. Moves to assemble cars closer to their destination market rather than ship them fully manufactured is another way in which the production process is getting greener.

Diversions ahead Take a step back, though. Average tailpipe emissions of 136.6 gCO2/km may be good, but they’re far from great. The European Union wants the figure down to 95 gCO2/km by the end of the decade and possibly as low as 68-78 gCO2/km by 2025. Nor is car ownership slowing. Forecasts from PwC suggest that about 24m cars are expected to roll off European factory lines come 2019, up from 19m at present.

PwC’s Harrold describes sustainability as the “lifeblood of the industry” but concedes much more must be done. “Is it enough?” he asks, referring to carmakers’ progress. “No, clearly not. We’re at a staging post in a journey.”

So, how will we achieve sustainable car travel as fast as possible? No one really knows.

Much has been made of electric vehicles (EVs) in recent years. EVs certainly ticks a lot of boxes. The BMW i3 electric supermini, due to hit UK streets in November, weighs in at 1,195kg (similar to a Ford Fiesta) and has no tailpipe emissions. We should all drive one: problem solved.

Only, we won’t. There are plenty of reasons why. Range anxiety (the BMW i3 will run for 100 miles or so before the battery runs out), infrastructure limitations (most regions lack sufficient charging stations), and price (the basic i3 model starts at £25,680).

According to PwC’s forecasts, only 1.34% of all the cars produced in Europe by 2019 are likely to be electric. Hybrids fare a little better, with projections of a 2.3% share of the market. Even if these numbers were to shoot up, questions still hang over the technology. If the electricity to charge a battery-powered car is generated from fossil fuels, then the carbon footprint remains much the same.

According to Jaguar Land Rover’s Garrett: “Unless you’ve got a green [electricity] grid, all you’re doing is switching the impact to another part of the lifecycle.”

Another area trumpeted by the industry is consumer use. Smart driving – not revving at the lights or driving with flat tires – can increase fuel efficiency (and reduce emissions) by up to 22%, according to ACEA. In the UK, Fiat has packaged its Blue&Me infotainment system with an Eco-Drive application. Linked via a USB, the interactive tool offers drivers tips on fuel-efficient driving techniques and enables them to track their carbon savings.

From a usage perspective, lift-sharing and car lending could reduce car ownership and individual journeys significantly. Peer-to-peer services such as BlaBlaCar, ZipCar, and WhipCar are helping breathe life into these collaborative modes of car travel. With a mind to scale, it bodes well that manufacturers such as Daimler (with its car2go initiative) and BMW (with DriveNow) are getting in on the game.

Rear mirror view For all its championing of sustainability, car manufacturers (much like oil companies) ultimately have a very fixed view of the future. It’s a future in which everyone has the right to drive a car. Their current business models are premised on shifting as many new cars as they can.

The only way this vision will change is if we, the driving public, start championing our own alternative. To date, there’s little sign of that happening.

Within the existing paradigm, the industry’s strategy of incremental improvements in fuel efficiency is perhaps the best we can hope for unless we renounce our car keys and seriously seek out more sustainable modes of mobility. Unlikely? Maybe, but if SUVs can change their spots, perhaps their drivers can, too. 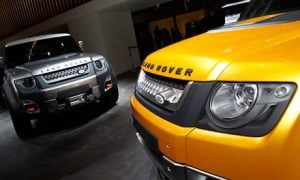