For architects, cars are the stars

If Norman Foster’s design for a new London bus to replace the Routemaster really does happen in 2012, it’ll be a first. Not the first London bus to ever arrive on time, but the first time an architect has successfully designed a motor vehicle. The fact is, while architects are fine at designing chairs, tableware, even earrings when it comes to automobiles, their efforts are usually flawed, if not just plain laughable.

You can judge how Foster and his peers did at a new exhibition at the London Transport Museum, displaying the winners of Boris Johnson’s New Bus for London competition (they shared first prize with Capoco), and 50 other entries – including one by architects Future Systems. Jan Kaplicky, who died last month, will be missed, but there are many things we’ll miss him more for than this frankly ugly design. It looks like an octopus on roller skates.

Yet, it’s by no means the worst vehicle an architect has ever designed. Check out, for instance, Zaha Hadid‘s Z Car from a couple of years ago. “Concept vehicle“ is the right term here, as it’s only really suited to a virtual road in an imaginary city in a big-budget sci-fi movie. Drive that in a real British town, and its pristine curves would bespatter with mud and scar with parking scrapes in no time. But then that’s what happens when your car has no bumpers or mudguards. Not to mention headlights, windscreen wipers, or any of those other dull little details that clutter up conventional cars. You’re better off with a Sinclair C5.

In the early days of the 20th century, architects eulogized motor vehicles for their functional beauty and their utterly modern manufacturing processes. It was inevitable that trailblazing modern architects would try their hand at them. Le Corbusier admittedly came up with a radical new shape for his Voiture Minimum in 1929, but that was really all he bothered to think about – the shape. How such a thing would actually work, he left to others, like André Lefèbvre and Flaminio Bertoni, designer of the remarkably similar Citroen 2CV. It’s a similar story with Adolf Loos’s back-of-envelope design for a new Lancia. Except for one look, and it’s clear why it was never built: it’s the ugliest thing on four wheels.

Others wisely stuck to pimping existing rides. Bauhaus head Walter Gropius did some rather elegant coachwork for the Adler Standard in the late 1930s. And Frank Lloyd Wright, arguably architecture’s greatest car nut, attempted to restyle existing models to suit his own brand identity. Let loose on a 1940 Lincoln Continental. His “improvements” included slicing off half the roof, filling in the rear window, lowering the front windscreen, and painting the whole thing a ghetto-fabulous bright orange. He was the Westwood of his day.

Perhaps architects are secretly jealous of automobiles. Cars reduce architecture to the mere background. Buildings will never mimic their mobility and their freedom. All they can do is stand still and watch. Cars still need architecture to accommodate their factories and park in front of for their glossy adverts. Many an architect has benefited from the big manufacturers’ desire for buildings that reflect their prestigious marques. You can pair them up: Zaha and Co-Op Himmelblau with BMW, UN Studio with Mercedes, Massimiliano Fuksas with Ferrari, Future Systems with Maserati, and so on. And let’s not forget Foster and McLaren. And Foster and Renault.

There is one architect, however, who really took car design seriously, and who really did succeed in reinventing the wheel: Richard Buckminster Fuller. True to fashion, Fuller rethought the automobile from first principles and came up with the amazing Dymaxion Car, a smooth, three-wheeled aerodynamic torpedo. It beat conventional cars hands down when it came to efficiency, visibility, maneuverability, spatial efficiency, and many other aspects. It still looks way ahead of its time today. Fuller tested prototypes and was ready to go into production, but a funny thing happened on the way to the Chicago World’s Fair of 1933. The Dymaxion Car was involved in a collision with another vehicle that killed its driver. The other vehicle was allegedly driven by a politician and was removed from the scene before reporters got there. Fuller got all the blame, and even though he was later exonerated, the damage was done, and the Dymaxion Car remains a curious dead-end.

Foster and Partners have wisely played it safe. For one thing, they teamed up with Aston Martin for their London Bus. Also, they’ve not departed too far from the original Routemaster design. They have reinstated the popular “health and safety be damned” open rear platform and the facing benches inside but updated the design with rounded off bodylines and maximum glass. There are also new features, like a solar-paneled roof and a central ramp entrance for wheelchairs and pushchairs. “We wanted to change people’s image of the bus as just something for getting across the city,“ says Foster partner Alistair Lenczner. “The idea was to make it a more social sort of bus, where people felt free to interact with each other. A sort of roving living room.” Tellingly, the architects extensively consulted drivers, conductors, and actual punters about what sort of vehicle they’d like – a simple step that seems to have slipped the minds of most other architect-car designers. Let’s see if they actually get the thing built. If they don’t, I’m catching the first Dymaxion out of here. 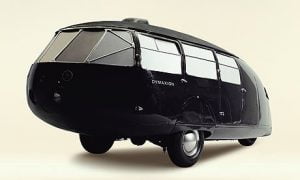