Given its heavy reliance on raw material and legislative duties that emphasize the reuse and recycling of end-of-life vehicles, Europe’s automotive industry is perfectly positioned to accelerate the agenda around closed-loop thinking. 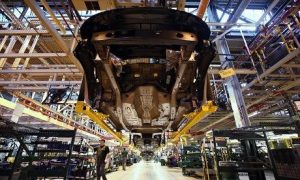 Renault’s Choisy-le-Roi factory has been pumping out remanufactured automobile parts since 1949 and has since diversified into injection pumps, gearboxes, injectors, and, most recently, turbo compressors.

The environmental payback speaks for itself. According to Renault, one remanufactured part uses 80% less energy, 88% less water, 92% fewer chemical products, and generates 70% less waste during production than a new part. The Choisy-de-Roi factory also doesn’t send any waste to landfills – materials are either reused, recycled in the company’s foundries to produce new parts, or sent for “valorization” (a French term for getting value back through recovery) in treatment centers.

Renault’s efforts haven’t gone unnoticed by other car makers. Last month Jaguar Land Rover (JLR) announced it would be exploring the potential for remanufacturing within its new state-of-the-art engine manufacturing facility in Wolverhampton, set to open later this year.

Ford and Peugeot currently supply engines for JLR cars. Still, the company’s director of corporate social responsibility Jonathan Garrett says taking greater ownership of its manufacturing is a natural next step: “The focus will be on brand new engines, to begin with … when those engines come back in 10 or 20 years, [remanufacturing] is where the emphasis will be.”

The company has already started to close the loop on one of its biggest materials, aluminum, through its REAL CAR project (pdf). This sets a specific target – 75% recycled content for every automotive aluminum sheet, 50% of which will be sourced from press sop scrap generated by JLR’s own manufacturing operations and primary external stampers, and 25% from post-consumer waste streams.

Adrian Tautscher, JLR’s group leader for materials engineering, says the initiative pushes the boundaries of how recycled aluminum can be utilized within the sector. “A fundamental part of the project is to increase the value of aluminum scrap and increase the revenue back into JLR. This helps to offset some of the high initial purchase cost of aluminum,” he explains.

He adds that the project has enabled the company to develop an aluminum sheet alloy with a revised composition to allow segregated process scrap to be brought back within a closed-loop and remelted into the same quality of an automotive product. The latest development, taking aluminum from post-consumer scrap such as drinks cans, will see the carmaker make forays into the waste management sector. It looks to conduct separation trials to extract the non-ferrous metal output from mechanical biological treatment (MBT) facilities.

Deutscher says there will be further opportunities for JLR to look deeper into its own supply chain in the future. Indeed, the end-of-life vehicles (ELV) phase is an area where evidence of smarter materials recovery is starting to emerge.

Within Europe, ELV legislation dictates that 85% of a car is recycled, a figure set to increase to 95% in 2015. Several manufacturers, including Nissan and Toyota, are involved in trials working with vehicle dismantlers, shredders, and recyclers to ascertain the best methods for high-value extraction of mechanical and, increasingly, mechatronics (mechanical/electronic hybrids) parts.

Nissan has published the results of some of its early experiments in this field. In contrast, Toyota is due to release its latest ELV trial findings involving 200 of its Prius prototype plug-in hybrid electric vehicles later this month in Brussels. Toyota worked with a Belgium dismantler on trial under controlled conditions, with the resultant hulks and materials treated using state-of-the-art recovery techniques.

According to Steve Hope, general manager for environmental affairs at Toyota Motor Europe, such trials will not only be critical in determining what the material impacts of the future vehicles might be. Still, they will help build greater refinement into the ELV recovery process itself.

“This was a unique opportunity for us to run a statistically relevant shredder trial in partnership with recycling industry leaders,” he says. “As prototype vehicles, they were only allowed on the road for a limited period despite the fact they were essentially very representative of the final production vehicle as far as the ELV directive is concerned.”

Within the UK, Toyota is about to embark on a ground-breaking project that will investigate the potential for circular economy realization across the entire ELV value chain. This will look at how relationships between key players, including customers, suppliers, dealers, repairers, dismantlers, and recyclers, can be reconfigured to close the loop on certain materials.

Looking ahead, the industry is set to experiment further with new service-based models such as leasing and access, gave the rapid rise of car-sharing schemes like Zipcar. “The challenge we have as a business now is how we can remain sustainable for the long term. There’s a big push now for what is going to be the new business model in our sector in 10 or 20 years,” says Jonathan Garrett.