It’s a warm, dry afternoon in the mountains of Coto de Caza, a gated community located an hour’s drive south-east of Los Angeles, and Major General William Lyon is showing me a used car. “It’s wonderful to drive,” he says. “As though it were new.”

Parked in front of us is a well-pampered Mercedes-Benz: clean, low mileage, plenty of room in the back. Chromed and polished to a mirror shine, the car wears a shade of blue so dark it reads as black from a distance – and one needs to step back a distance to see the car anyway since it’s 20 feet long.

The automobile in question is a 1941 Mercedes-Benz 770K Grosser W150 Offener Tourenwagen. It is among the rarest cars of the war era, and this particular one is rarer still.

Its upholstery conceals compartments for Luger pistols. Hidden below the serpentine body panels are ¾-inch steel plates that, together with the 1½-inch-thick window glass, armor the limousine sufficiently to survive a grenade blast or a jaunt over a landmine. The car’s total weight comes to five tons. This might be a good time to get one other detail out of the way: the car was originally built for Adolf Hitler.

Summary show
Hitler’s car
General Lyon’s antique car collection, by contrast, is private.
But there were exceptions, and General Lyon’s car is one of them.
For notoriety, however, three brushes with Hitler are plenty.
steering wheel
panel Hitler car
The big Mercedes has been something of an albatross for the Lyons, too.

The trips to and from Finland’s Imola airstrip were the only two times that Hitler ever rode in Mannerheim’s Mercedes-Benz. Nevertheless, the limousine would be known as Hitler’s car during its second life in the United States after the war. Photograph: SA-KUVA Aged 92, General Lyon is a man enjoying a well-earned and well-funded retirement. A pilot flew in the second world war and Korea and later ran the air force reserve; he has loved planes and automobiles since he was a young man. But not until he made his fortune as a developer could the general indulge his mechanical passions in the manner he does today. His second world war aircraft fleet can be seen at the Lyon Air Museum, a hangar out at the Orange County airport.

Nestled in the orange groves of his 135-acre estate, the automobile museum is a 23,000 sq ft building where Cadillacs, Packards, and Duesenbergs rest their treads on a white marble floor for the enjoyment of the general alone, plus the occasional guest.

That I happen to be one of those guests is the reason why I have flown 3,000 miles from New York for the sole purpose of staring at an automobile that I will never drive or own, and in fact, is not for sale anyway. 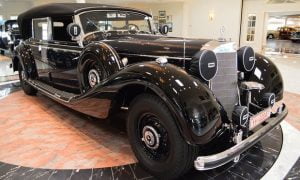 For the last two years, I’ve been working on a book on the handful of Hitler’s limousines that not only made it through the second world war but also made it to the US.

Throughout the postwar era, Mercedes-Benz limousines scavenged from the ruins of Germany had this uncanny way of popping up in American war bond drives, county fairs, and carnival midways, where the cars were billed, almost invariably, as having belonged to Hitler.

Hitler’s car Facebook Twitter Pinterest 4 June 1942, Hitler flew to Finland to play Field Marshal Mannerheim a surprise visit. The gift Mercedes then took the Führer and the Finnish president, Risto Ryti (wearing fedora), to this railroad siding, where Mannerheim’s private train waited. Photograph: SA-Kuva
For a brief time, the big black machines caused a national sensation – in large part, I suspect, because they were the closest that many Americans could get to see, and sneering at, Hitler personally. At least one of these cars was a fraud, and few came with any evidence that linked them to Hitler.

But there were exceptions, and General Lyon’s car is one of them.

According to the musty order ledgers at Daimler-Benz in Stuttgart, this Mercedes was made as a geschenkwagen – a presentation car. Hitler not only kept a fleet of Grosser 770K limousines (several of them armored) for his own use, he relished giving them as gifts to foreign heads of state.

One of the recipients was Finland’s Field Marshal Carl Gustaf Mannerheim. In 1941, as he watched belligerent Soviet armies massing across the Karelian isthmus, Mannerheim decided that the only way to save Finland from Stalin was to ally himself with Nazi Germany. As a thank-you gift, Hitler bought Mannerheim a Mercedes-Benz – this Mercedes-Benz.

Here is where the fact of Hitler’s “ownership” of the car becomes a matter of semantics. Photographs and other documents from the period, including the diary of Hitler’s own chauffeur, substantiate that Hitler inspected this car at his military headquarters in Poland and later rode in the car – twice – in June of 1942, during a visit, he paid to Mannerheim near the Imola airstrip in southern Finland. This is to say, technically, that this car did not belong to Hitler as such; it only gave him a lift to and from the airport.

For notoriety, however, three brushes with Hitler are plenty.

Once you know that Hitler rode in this car, it’s impossible not to see, literally, the devil in every detail.

The limousine’s bulging fenders cover the front tires like panther claws, while the V-shaped chrome grille suggests nothing so much as an ax blade. The wide, sweeping running boards feature built-in mud scrapers (for jackboots, presumably). Under the hood, so heavy it takes two of General Lyon’s men to lift it, the straight-8, the cast-en-bloc engine is a beautiful and terrifying enterprise of chrome, black enamel, and damascened steel.

Even in the 1930s, one critic dismissed the 770K’s “aggressive styling and Teutonic arrogance.” But Mercedes’s imperious profile was a perfect fit for Hitler, who proclaimed he could “not tolerate a car manufactured by another company.”

As I peer into the velvet-lined tool chests, at the precision of the dashboard gauges, I find it not difficult to imagine why a megalomaniac like Hitler took pride in such artistry.

General Lyon takes a different kind of pride in the 770K: it represents the culmination of his collecting. “Before I pass on,” he told me as we sat on the museum’s chesterfield sofas, “I wanted to restore this car.” This makes it all the more surprising that the general actually didn’t know the car’s full story when he bought it 31 years ago.

It’s rare for any Grosser 770K to come on the market, and in 1984, when a broker told Lyon there was one for sale – parked in an abandoned rollerskating rink in San Diego, no less – he went and took his son Bill with him.

“I was eight or nine years old,” recalls Bill H Lyon, who is today the CEO of William Lyon Homes. “I ran up and knocked on the door. It was like a speakeasy. Only when my dad knocked did they let us in.” The 770K was clean, and the price (which the Lyons prefer not to disclose) was fair.

Paperwork? “No, we had nothing,” the general says. Bill Lyon says his father took the broker at his word: “It was supposed to be Hitler’s car,” he says.

Lest the above account makes the Lyons look like naive buyers, it should be said that the car was already famous in America as Hitler’s car. It had come to the US in 1948 when a Chicago importer named Christopher Janus took it in trade from a Swedish businessman who couldn’t cough up enough American dollars to pay for a shipment of ball bearings.

Perhaps it was the language barrier, or maybe it was just the way stories mutate when they are told over and over. Still, from the day it arrived at New York’s Pier 97, the big Mercedes that Hitler had given as a gift to the field marshal of Finland became Hitler’s car.

And, not unlike Hitler, the car had a knack for drawing mobs. For the next decade, the limousine crisscrossed America, generating headlines and raising hundreds of thousands of dollars for various charities. The 770K sat behind velvet ropes at Rockefeller Center, where its celebrity visitors included Howdy Doody. It motored from Manhattan to the Illinois State Fair with an 18-year-old air force recruit at the wheel and a “Liberty Torch” in the back. The son of one owner told me how he’d drag-raced the car up a virgin stretch of Interstate 95 in Rhode Island with a police escort.

In the late 1940s and well into the 1950s, spectators tended to regard the purported Hitler car as a war trophy, a battered but undeniable affirmation of American military and moral certitude. But by the 1960s, amid the social tumult and a growing understanding of the scale and meaning of the Holocaust, the limousine generated more controversy than curiosity.

Though the 770K would fetch prices that set a world record for the highest price paid for an automobile at auction (topping out at $176,000 in October of 1973), it also brought the death threats that caused owners to sell.

The big Mercedes has been something of an albatross for the Lyons, too.

Given the 770K’s immense structural and engineering complexities, it would take two decades (on and off) to restore it fully. “For 15 years, we struggled to find tires that would carry the weight,” Bill Lyon says.

Another complication surfaced just a year after buying the car when Bill Lyon happened across a book self-published by Mercedes expert Jan Melin, who exposed “the completely spurious belief that the car had belonged to Hitler” and proved that this machine had carried the tyrant only twice.

Nevertheless, the fact remains that the car was built by order of the 20th century’s most notorious genocidal butcher, and that’s a heavy piece of baggage, even for a five-ton Mercedes. It also prompts one to wonder why someone would want to own a relic with a history this dark in the first place.

“Separating the [car’s] historical significance from the evil side of what the Nazis were about may be harder for the younger generation,” Bill Lyon explains. “People say, ‘Why would you want anything to do with it?’ But it’s an important piece of history, and there’s a reason to respect it” – in part as a