“It’s that screech of tires behind you, GraetNew, which makes your heart jump into your mouth,“ says behavioral consultant Crawford Hollingworth. “I’ve had some close calls as a cyclist in London and Oxford. Almost every day, friends who cycled to the office would arrive with a story of how they’d had to brake to avoid a car because someone didn’t quite see them, or how a wing mirror had caught their arm.“ 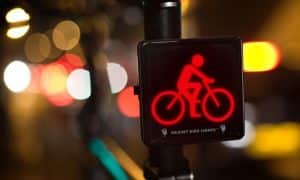 A regular Boris bike user himself, Hollingworth decided to apply some techniques honed in his work to the issue of urban cycle safety. The result was Brainy Bike Lights, which uses the familiar icon of a bike and rider to speed up a driver’s identification of a cyclist – and, hopefully, an associated sense of their vulnerability.

“I was struck by how many incidents there were – the kind that goes unreported – and I also saw more and more of those white ghost bikes, marking the places where cyclists have been killed,” Hollingworth says. “Behavioural insight is using any understanding of the brain’s working to change behavior. It understands how the brain is structured, and creating things that play to that structure.“

This begs the question, are there other insights from behavioral science that could improve cycling safety?

Hollingworth, who founded the Behavioural Architects consultancy and has a background in social psychology and advertising, takes a moment to think and then reels off some ideas. A poster reading “85% of drivers make sure they give more room to cyclists“ could be interesting, he says. Or how about a play on HMRC’s campaign against undeclared income, featuring a pair of eyes and something like “stray into this advanced stop box and get a £1,000 fine – we’re watching“.

“If you wanted to get more graphic, you could use photographs showing what happens when a car hits someone’s leg. No one really wants to hurt people,“ he says.

Research from the AA and Populus last month found 93% of drivers said it was sometimes hard to see cyclists while driving, with more than half often “surprised when a cyclist appears from nowhere.” Another study showed that drivers failed to see one-in-five cyclists, with younger drivers missing one-in-three.

Crawford Hollingworth Behavioural Architects founder Crawford Hollingworth with one of his bike lights, “When you’re driving, your brain is looking to make sense of things, and it’s doing it in milliseconds, mainly at a sub-conscious level,“ says Hollingworth. “Drivers are essentially on auto-pilot. The brain is operating on a system, intuitive level, making snap decisions.

“At the same time, when you’re driving in a city, you’re likely to be tired and stressed. Maybe you’re going in to work in the morning, and you’re just waking up, or you’re going home at night after a long day. You’re irritated by all the traffic and noise around you, and, essentially, your brain is under strain. You’re trying to decide whether that red light is a cyclist, part of a car, or just a reflection in a shop window. You’re trying to judge perspective, and you’re trying to interpret what’s going on …“

Hollingworth cites another study which found that more than half of car commuters said they drove on autopilot, with a quarter unable to recall basic details of their journey, such as whether they had to stop at red lights.

With drivers bombarded by a barrage of bright, flashing lights, signs, and sounds, their brains need help if they are to come to the right conclusions quickly, says Hollingworth. “If you don’t help the brain to be cognitively efficient, it will struggle, which is why I think lots of people miss cyclists – or don’t see them clearly enough.“

The solution flashed up in front of him one day, in the form of a cycle symbol on a road crossing. The symbol is international and allows lightning quick identification – cutting brain processing time and allowing drivers extra time to react – but Hollingworth‘s lights use a subtly different image.

Charles Spence, professor of experimental psychology at the University of Oxford, says the symbol of bike and rider together subconsciously “primes“ drivers to think not just of a bike but also of a vulnerable human being.

The cross-modal research lab run by Spence – who worked with chef Heston Blumenthal to develop Fat Duck dishes, including bacon and egg ice cream – conducted a simulated driving test to compare Hollingworth‘s lights with traditional alternatives. The test found the new symbol lights allowed identification of cyclists “significantly faster“ than traditional lights, saving around 100 milliseconds on average – which equates to an extra 1.3 meters of stopping distance for a car traveling at 30mph.

“With a traditional bike light, people were getting confused in complex, busy road scenes, with lots of different lights which all look the same,“ says Spence. “There’s much more processing to say whether it’s a cyclist or another car. [The symbol light] has a more intuitive, direct and unambiguous meaning.“

“Basically, we’re using our knowledge of how the brain is structured to influence a person’s behavior,” says Hollingworth. “Originally, I thought these lights would stop people getting knocked off and killed – which I think they will – but I think it will also have this subconscious effect and give drivers extra milliseconds to adjust, and so give cyclists slightly more room, without even knowing that they’re doing it.“