End of the car age: how cities are outgrowing the automobile

Gilles Vesco calls it the “new mobility.” It’s a vision of cities in which residents no longer rely on their cars but public transport, shared cars and bikes, and, above all, on real-time data on their smartphones. He anticipates a revolution that will transform not just transport but the cities themselves. “The goal is to rebalance the public space and create a city for people,” he says. “There will be less pollution, less noise, less stress; it will be a more walkable city.”

Vesco, the politician responsible for sustainable transport in Lyon, played a leading role in introducing the city’s Vélo’ve bike-sharing scheme a decade ago. It has since been replicated in cities all over the world. He is now convinced that digital technology had changed the rules of the game and will make possible the move away from cars that were unimaginable when Vélo launched in May 2005. “Digital information is the fuel of mobility,” he says. “Some transport sociologists say that information about mobility is 50% of mobility. The car will become an accessory to the smartphone.”

Vesco is nothing if not an evangelist. “Sharing is the new paradigm of urban mobility. Tomorrow, you will judge a city according to what it is adding to sharing. The more that we have people sharing transportation modes, public space, information, and new services, the more attractive the city will be.”

Vélo’s scheme is being extended, car clubs that use electric vehicles are being encouraged. Vesco calls a “collaborative platform” built to encourage ride-sharing by matching drivers with people seeking lifts. There is, he says, no longer any need for residents of Lyon to own a car. And he practices what he preaches – he doesn’t own one himself.

Pedestrian-friendly central Lyon, on the banks of the River Rhone. Facebook Twitter Pinterest Pedestrian-friendly central Lyon, on the banks of the River Rhône. Photograph: Alamy, The number of cars entering the city has fallen by 20% over the past decade, without even a congestion-charging scheme (Vesco says it would impose a disproportionate burden on the less well-off, who tend to drive higher-polluting vehicles). And even though Lyon’s population is expected to rise by more than 10% over the next decade, he targets a further 20% drop in car use. The car parks that used to run alongside the banks of Lyon’s two rivers have already been removed, and human parks opened in their place. Vesco says someone returning to Lyon for the first time in a decade would barely recognize the city.

The goal is to rebalance the public space and create a city for people. Gilles Vesco Birmingham, which vies with Manchester for the title of England’s second city, has been following the experience of Lyon and other European cities closely and is now embarking on its own 20-year plan called Birmingham Connected, to reduce dependence on cars. For a city so associated in the public mind with car manufacturing, this is quite a step. The initiative is being driven by the veteran leader of Birmingham city council, Sir Albert Bore, who talks airily about imposing a three-dimensional transport plan on the two-dimensional geography of the city: “French and German cities all have an infrastructure which has a far better understanding of how you need to map the city with layers of travel.” 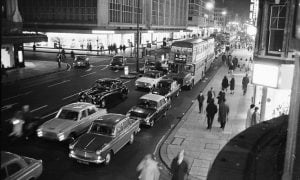 “Multi-modal” and “interconnectivity” are now the words on every urban planner’s lips. In Munich, says Bore, planners told him that the future city dwellers would no longer need cars. Bikes and more efficient public transport would be the norm; for occasional trips out of the city, they could hire a car or join a car club that facilitated inter-city travel. The statistic everyone trots out is that your car sits outside, idle and depreciating, for 96% of its life. There has to be a more efficient way to provide the average of seven hours a week when you want it.

Bore recognizes that his plan to transform his city will not be easy and require a healthy public education. “Birmingham was seen as the champion of the car,” he says, “and as a result, it didn’t develop an underground or the tram network you see in major cities across Europe. There’s been a failure to develop those systems because there’s been no longer-term vision.” Birmingham now has a long-term plan – but what it doesn’t have is the money. It needs £4bn; so far, it has raised only £1.2bn. The central government, private-sector developers, and local businesses will have been convinced it’s worth it.

Birmingham was seen as the champion of the car, so there’s been no longer-term vision. Sir Albert Bore Anne Shaw, Birmingham’s head of transportation services, walks me around the city’s center to show me the changes already taking place. The single tram line, which runs from Wolverhampton, is being extended; the gyratory road that cuts off many municipal buildings is being taken out and traffic re-routed; forbidding concrete subways are being removed; cycle lanes are being put in, and fast bus service is planned.

Perhaps, Birmingham will even have its own underground system, though that is many years and millions of pounds away. Commuting into Birmingham is currently split 50-50 between car and public transport; that, too, has to change – in London, only 15% of commuters use a car. In Birmingham, the district in the center which houses Symphony Hall and the new state-of-the-art library is called Paradise. One day, Bore hopes it will live up to its name.

The planners in Birmingham accept they are late to the party. London, which has pioneered congestion charging and has a well-integrated public transport system, has led the move away from cars over the past decade. During that time, 9% of car commuters have switched to other forms of transport. “People in London have a lot of options, and there’s been huge growth across all modes,” says Isabel Dedring, the American-born deputy mayor for transport in the capital. “There’s been a massive increase in investment in public transport.”

London’s Piccadilly Circus in 1969, when car parking was still free in most of the capital.

Dedring says London has always been progressive in terms of public transport – its narrow, twisting roads were never conducive to the automotive domination that occurred in many US and European cities in the 1960s and 70s when the car was king. But from the turn of the millennium, there has been a concerted attempt to encourage switching to other modes of transport, and the past decade has seen a 30% reduction in traffic in central London.

“Traffic levels have gone down massively,” says Dedring, “partly because of the congestion charge, but also because we are taking away space from private vehicles and giving it to buses through bus lanes and to people through public realm [developments].” And now to cyclists, too, with the planned “cycle superhighways” and cycle-friendly neighborhoods being trialed in three London boroughs.

London’s twisting roads were never conducive to the domination by the car that occurred in many US and European cities
In Waltham Forest, which runs one of those pilot schemes (tagged “mini-Holland”), I go cycling with councilor Clyde Loakes, deputy leader of the council and the cabinet member responsible for the environment. What used to be rat runs in the area now known as Walthamstow Village have been closed to through traffic, and at a stroke, the number of vehicles using the area has dropped by more than 20%. The area is tranquil and relaxed when we cycle around one weekday afternoon; indeed, it comes as quite a shock when we leave the confines of the village and are suddenly pitched back into the noise and traffic as we head to the town hall.

Loakes says the trial attempts to alter behavior and the feel of the area and recognize that change is already occurring. “In Waltham Forest, we have an increasing number of households without a car. Public transport is getting better; we have an increasingly young demographic; and in many of the developments being built, car parking is not a priority, so car ownership is not an option.”

To put it more bluntly: many city developments are now predicated on there being no car spaces for residents. Developers worried about this initially but have come to realize it doesn’t pose a problem for the young professionals likely to be buying their flats, so they have accepted the demands of council planning departments.