A carbon fibre bicycle made for one

Visitors to the Bespoked Handmade UK Bicycle Show in Bristol earlier this year would have noted how bike building in the UK is undergoing a renaissance. One builder stood out on a floor of 100 exhibitors, dominated by custom steel and titanium bikes, because of his choice of material: carbon fiber.

While most road bikes are carbon fiber these days, custom frames built from lightweight material are rare because of the technical challenges. However, from his workshop in Worcestershire, Richard Craddock is overcoming these barriers Do Some Work. 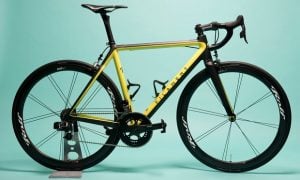 A filament bespoke carbon tandem bike frame Craddock/Filament Cycles Craddock spent many years designing cycles for various brands and riding for an amateur racing team in France before deciding to build a carbon bike “exact for me.” He spent almost four years developing and testing before offering his Filament bespoke carbon frames to the public. “I’ve never stopped building since,” he says.

So what is the appeal of his carbon bikes? “The primary USP is custom geometry,” says Craddock. “Two riders of the same height could be stocky or like a willow, and I can build for their weight, not only their height. I can make a frame that will hold them exactly without compromise.”

He achieves this with the geometry and selecting the right tube diameters, fiber and resin types, and the number and sequence of plays used for joining the tubes. Perfecting the joining process was a major challenge enabling him to create custom frames without expensive fixed molds.

Now the challenges come from his customers. One recent project was to build a bespoke carbon tandem – a bike that the owners have since used to set a mixed-team UK 10-mile time trial record.

The best women’s summer cycling kit Beyond the geometry, paint job, and components, Craddock can offer other bespoke features that are rarely found on off-the-peg cycles. For instance, the bike pictured features Sram’s new wireless eTap gear-changing system. Craddock built a frame with zero provision for cables, rather than just plugging a stock frame’s redundant holes with rubber as some major manufacturers are doing.

Of course, this kind of attention to detail isn’t cheap, yet his bikes often cost less than top-tier mass-produced models from major manufacturers. Craddock says the majority of his customers are people “who’ve had a string of good bikes and are still on the search for something just so.”