WordPress has removed an interview with the “homophobic” campaign Straight Pride UK after the group used US copyright law to issue a takedown notice. 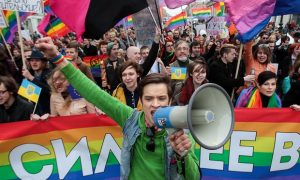 In an interview posted on his WordPress blog, student Oliver Hotham published an interview with the group described as having a “homophobic agenda” by gay rights campaigner Peter Tatchell, in which they stated that they “admire President Vladimir Putin of Russia for his stance and support of his country’s traditional values”.

Hotham said the information was volunteered by the Straight Pride UK press officer during an email exchange.

Hotham says that Nick Steiner, a press officer for the group, said in a document headed ‘press release’: “Straight Pride support what Russia and Africa is doing, these country have morals and are listening to their majorities.”

“These countries are not ‘anti-gay’ – that is a term always used by the homosexual agenda to play the victim and suppress opinions and views of those against it.

“These countries have passed laws, these laws are to be respected and no other country should interfere with another country’s laws or legislation.”

When asked who the symbol of straight pride would be, the spokesman expressed more support for Vladimir Putin, whose crackdown on gay rights has been the trigger to a widespread anti-gay campaign in Russia.

Hotham published the interview on his WordPress blog, but says he was then contacted by the Straight Pride UK press officer asking him to remove the piece within seven days or be threatened with a DMCA, Digital Millennium Copyright Act, takedown notice My Update Web.

Hotham did not take down the post, and WordPress then proceeded with a DMCA takedown notice on 3 August.

The DMCA contains a provision mandating any company to instantly remove material if they are informed it breaches copyright.

Hotham and Straight Pride UK are based in Britain, but the law does cover WordPress, Hotham’s American blogging platform.

“They have about 50 likes on Facebook – I’m not all that frightened of them,” he told the Guardian. “I thought they were weird and interesting. No one had taken the time to ask them what they actually thought.”

Hotham argues that the blogging providers should be more aware of the possibility of abusive takedown notices being filed.

WordPress is legally required to respond to DMCA notices, but also instructed Hotham how to counterclaim, though one of the requirements was to “consent to local federal court jurisdiction, or if overseas, to an appropriate judicial body”.

“It shows that they haven’t adapted to the fact that WordPress is this big thing for people to do journalism on … They’ve got to work out a new system for this.”

In a statement, WordPress said it recognised that this was an abuse of the DMCA law.

“We think this was a case of abuse of the DMCA and we don’t think that taking it down was the right result,” said Paul Sieminski, general counsel for WordPress parent company Automattic. “It’s censorship using the DMCA.”

He explained that WordPress reviews and acts on all notices, unless claims are overly broad or not compliant with the DMCA law.

“We can’t verify that the complainant actually owns the copyrighted information – we rely on the fact they sign their complaint and verify, under penalty of perjury, that they own the copyright,”

Sieminski said that WordPress gives clear instructions on how to counter a takedown notice, which can result in something being reposted. He added that WordPress is working on countering abuse of the DMCA.

“We’re experimenting with a couple of tools that will help us identify and blacklist people who submit bad DMCA notices on a regular basis,” he said. “There is also a provision in the DMCA that allows Automattic or a site owner to sue the person who submitted a false notice, which we consider doing in cases of abuse.

Adam Rendle an associate and copyright specialist at the law firm Taylor Wessing, said the DMCA is a law used intensively by the media and entertainment industries to pursue copyright breaches, but that this is an example of DMCA being used to suppress legitimate criticism.

“The DMCA system is structured so that the intermediary (WordPress in this case) is very likely to have the complained-about material taken down initially even though (a) the copyright owner appears to have consented to its copyright material being used and (b) one of the defences (fair dealing for the purposes of criticism or review) to copyright infringement may apply,” said Rendle.

“It is for the user of the material (Oliver Hotham) to make his case to the intermediary and have the material reinstated, which can take some time and may never happen.

“It is, of course, another example of a heavy-handed reaction to legitimate criticism causing more harm than the original criticism.”

In a statement its sister organisation Straight Forward in Moscow, head of operations Peter Sidorove said that Hotham had claimed to be a journalist and that since publication of the piece, it has been forced to report online harassment including hacking of its site to the police.

“Oliver didn’t tell Straight Pride UK at any point that he would be putting what Straight Pride UK told him online for all to see. It was a private release for him,” he said. “Straight Pride UK thought as he was a student that we would add fun to it, dress it up and make him feel like a reporter by adding ‘Press Release’ to the document, this document also had a notice saying that it was not to be reproduced without consent.”

Sidorove claimed that content from the Straight Pride site had been copied to a fake website impersonating the organisation, and that it had been forced to change its Twitter and Facebook accounts because of abuse.

“We have made further DMCA requests to all bloggers and will seek removal of this copyrighted content that is now being used to commit harassment.”

“This has proved that society needs Straight Pride and heterosexual events, to enable heterosexuals to have the right to speak out against the alternative lifestyle and defend ourselves against the now prove aggressive homosexual agenda.”