On a mission to democratise publishing – Matt Mullenweg interview

So what’s the mission statement for Automattic / WordPress and how has this changed over time?

Automattic’s mission has always been very aligned with WordPress itself, which is to democratise publishing. Basically what I found after a few years of doing WordPress was that there were certain things that a company was just better set up to do to bring an open source publishing platform to the masses. Things an open source project on its own couldn’t do, so that’s what Automattic is basically set up to do, to work as a distributed company. So we now have over 190 people, all over the world, in 26 countries and around half the US states, and basically what we do is work on open source software all day. We try to bring this thing that we really like, and that we think can make the world a little more transparent, to a wider audience My Update System. 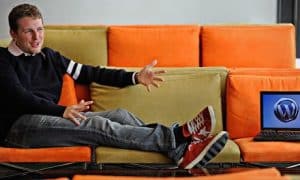 You’re going to be speaking at GigaOM’s Structure Europe event in London on 18-19 September where the focus will very much be on the Cloud, and specifically on the technology and the product needs of cloud services in Europe. How important is the cloud to an organisation like yours and how do you use it?

We use our cloud services to do things that we couldn’t do in a distributed fashion. A lot of the early adoption of WordPress was actually from thousands and millions of individually hosted instances, so a lot of the people who ran WordPress were on their own. But the cool thing is that we created this plug in called JetPack which basically allows you to get the control of your own hosting, whether that’s on premise or on servers like Go Daddy or Blue Host, with the power of the things WordPress.com and Automattic can do from the cloud. A good example is video transcoding, a very CPU-intensive task that needs a lot of space and memory to transcode video. For us it’s trivial because essentially CPU and space is unlimited but if you’re paying $5 a month to a company like Go Daddy, they don’t take kindly to you using the whole server just to transcode videos of your cat so we authorise all of that, giving people the best of both worlds.

You’ve been a disruptive force in online publishing for more than a decade, and yet now you’re working with many of the publishers you’ve disrupted the most. How does that feel? And how does it work?

We were never setting out to disrupt the New York Times or the Guardian. Who we were disrupting were the vendors who were charging you guys $5 and $10million for crappy software. It was bad IT departments maybe who were getting disrupted, but not the actual publications. WordPress has always been about the office and about writing and things like that so a lot of times how we got into CNN, New York Times, Wall St Journal, basically the who’s who of publishing and online journalism – journalism in general – was from the bottom up. So it was a journalist who had permission and set up a blog somewhere and then it just kind of took off and then someone higher up took and look and said “this is working kind of well, let’s do more of it” and so eventually it makes its way up to the CTO. But we almost never, ever come in through the top, we always come in through the bottom.

You’ve described your company’s distributed way of working – of Automattic’s 190 employees, nearly all of them work from home and are scattered across some 141 cities and 28 countries – as “location agnostic”. What are the realities of running a company like that and where are the benefits?

The key benefit of working like this is that you have access to the entire world’s talent, you don’t have to discriminate against people on the basis of their location; you can really get the best people wherever they are in the world. The downside is that if people are working from home it can be a bit more isolating so that’s why we encourage people, especially if they’re single and don’t have a family, to try and work in a co-working space, a coffee shop or places like that. You are also very reliant on the quality of your internet connection – we do a lot of video and we do a lot of online collaboration and things like that and if you’re on a bad connection it’s a pretty terrible experience for everyone involved. Interestingly we now have a handful of employees who don’t have a home – they’re just on the road all the time. They take advantage of Airbnb and couchsurfing and things like that. It matches a thirst to see the world, and if you can have a job which affords you being able to do that, it’s pretty exciting, and you get the best of both worlds.

A recent piece by Forrester’s James Staten has suggested that the revelations on NSA surveillance could see the US Cloud industry losing as much as $180bn by 2016, although he went on to suggest it was likely to be less than this due to the inherent business benefits of cloud and the horse having already bolted. To what extent do you think the Cloud is at risk from the repercussions of the Prism story and have you seen any direct impact at WordPress in terms of drop off?

No, we haven’t seen any drop off, and remember WordPress is a tool for publishing, not for keeping things private. I think for our customers there’s also less of an impact. But I think overall I don’t see this being a huge issue for Cloud in the way you’ve outlined. I think what the NSA is doing is morally odious, and horrible and should stop but they appear to be doing it all over the world, not just in America. It doesn’t really matter if you’re a company or not, it’s happening in the UK, New Zealand, Australia, China – all governments are doing this and hopefully the discussion that’s happening around this with rein some of this in and I think, and I hope as an American, that we will have the best response to this over the next few years, meaning that we clean up our act the most.

What’s next for WordPress / Automattic? Is there anything major you’re working on you can tell us about?

Yeah, so it’s actually a side project or a hobby, but I’m very excited about it – we’ve just acquired an app called Simple Notes. We actually acquired it for the synchronisation technology behind it – it’s a note taking app – but they’ve built a really cool engine for synchronising arbitrary types of data between devices working online and offline, but then next we’re actually going to relaunch all of those simple note apps both targeting a Mac version, an Android version and an iOS 7 version, and they are really, really beautiful. As a journalist yourself who takes a lot of notes I’d love for you to check it out.

What can we expect from you when you talk at Structure Europe at the event? What are you looking forward to?

Om’s conferences are always fantastic and I usually go into them without expectations because he slips in a speaker or two that I’ve never heard of who will blow my mind. I’m also actually really looking forward to being in London – it’ll be my third or fourth trip to London this year and I always love coming to the city.