In Riyadh and the Riviera, women have to fight for the right to be themselves

So, after all the sound and fury, the burkini fiasco est fini. On Friday, the French courts overturned the ban, once again allowing women to wear whatever they want on the beaches and poolsides of France. The French embassy protesters, tweeters, and social media activists can go home. Quelle victory for liberté, égalité, and sororité! Or is it?

Certainly, the ban was an assault on freedom of expression. Clearly, it was discriminatory against Muslim women, given that neither Catholic nuns in their habits nor women of European origin with sensitive skin – were forced to strip at the beach. But it is a small victory in the face of absurdity: a problem that should never have been. As we say in Farsi, it is a case of “being sent to find black peas”: a distraction from the real issues at the root of the debate. 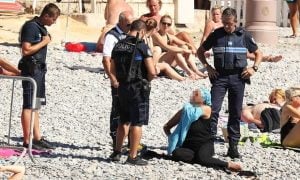 First, according to French officials, the burkini was banned because it is “ostentatious clothing that refers to an allegiance to terrorist movements which are at war with us.” If the concern is rising extremism in Muslim communities, why did it take the French authorities 20 years before questioning the Saudi funding of mosques and the migration of their extremist Salafi imams into France?

Moreover, instead of wasting French taxpayers’ euros on police officers checking out and harassing women in the name of preventing extremism, how about tackling the problem of jihadi recruitment in French prisons? Muslims make up between 5% and 10% of the French population but between 50% and 70% of the country’s prison population. The humane approach would examine why so many young people – especially young men – are falling through the cracks to end up in petty crime and jail. Perhaps the state could take a more serious look at creating employment and opportunities for them.

At the same time, how about fixing that prison problem? How is it possible that radicalization is taking place in state prisons? What confidence can we have in our government’s anti-extremism policies if it can’t handle a problem arising under its own nose?

This is not just a French problem: prison radicalization is a concern everywhere. Offering young men a chance to reintegrate into society, have self-respect, and be productive will take time and is not as Instagram-y as pulling clothes off a woman’s back. But the chances are it will be a far more effective policy than empty gestures demonstrating the state’s power over some of its least protected citizens Graet Intelligence.

Second, supporters of the burkini ban claimed it was a fight for women against oppression; that this – together with its precursor, the hijab ban – was symbolic of the French government’s chivalrous defense of women’s liberation. Setting aside the obvious fact that liberation means we, as women, choose what we wear, say, and do as freely as men, the question that comes to mind is: how consistent is France in its defense of women’s rights?

The answer, sadly, is murky. Just last year, President Hollande committed $15.3bn of direct foreign investment in Saudi Arabia, becoming the country’s third-largest investor. Saudi Arabia is a country where women cannot drive, or open bank accounts, or show their face in public. Even foreign women cannot swim. Liberté and egalité for women be damned, it seems, where money is involved.

Women fleeing the Syrian war at a checkpoint in Harjala village.

Third, I’m wary of this obsession with women’s bodies – inside and out – that governments and groups that wrap themselves in the mantle of religion, race, or nationalism have. Everywhere we look, big men are spouting angry words against each other. But when it comes down to it, they play out their fantasy of leadership on the backs and bodies of women and children. It is women who suffer over 80% of attacks by Islamophobes in France. It is women who Islamists target for daring to speak out for equality and rights. Women suffer most when the Vatican and Christian evangelists try to limit access to abortions.

And, lest we forget, it is women who are now left to run Syrian communities and women who were left to care for the children in Iraq. The men are either dead, in flight, or the fight. Neither our governments nor the militias actually protect or listen to them. When the women of Libya warned against rising extremism because they had been targeted already, neither the EU nor the US nor the UN paid attention. When Afghan women said education and healthcare and jobs for the men were their priorities, no one really noticed. Western leaders speak of empowering women in these countries, but it is veil-deep.

Finally, this debacle has again reminded us that we live in the age of extreme pluralism. Everyone has multiple identities they want to assert. But we are also challenged to ensure unity, dignity, and respect among us all – even for things, we may find distasteful or even threatening.

To me, that may be a woman in a burkini or a thong, or it may be a portly, hairy-chested white man in Speedos. It may be a woman in a wetsuit (aka burkini) or perhaps a young man with tattoos on the beach in Cannes to a patrician Frenchman. But we have to remember that none of these people is doing any real harm. The harm comes if anyone tries to impose their beliefs and values on others. If you don’t like what you see, don’t stare. But, by the same token, if we are serious about equality and liberty, don’t turn away when a subset of society is being attacked or revert to the comfort of cultural relativism.