What is the Clinton Foundation? And are the latest rumors ‘smoke without fire’?

Bill Clinton spoke out on Wednesday with a heartfelt defense of the charitable foundation he set up 15 years ago. That now casts a shadow over his wife Hillary’s presidential campaign.

“We’re trying to do good things,” he told reporters in Atlanta. “If there’s something wrong with creating jobs and saving lives, I don’t know what it is. The people who gave the money knew exactly what they were doing. I have nothing to say, except I’m really proud of the work they’ve done.” 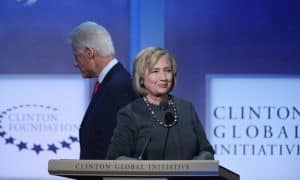 But the issue of a potential conflict of interest between the Clinton Foundation and the state department, where Hillary was secretary from 2009 to 2013, has dogged her election campaign this week, finally taking some heat off rival Donald Trump.

Interpretations range from corruption “bigger than Watergate,” as former New York mayor Rudy Giuliani put it, to manufactured scandal. Late-night TV host Stephen Colbert summed up the ambivalence: “The Clinton Foundation scandal lands right up there as ‘maybe a thing,’ which is the same ranking as bald guys with ponytails, because it may not be a crime, but it sure doesn’t look good.”

Smoke without fire? Suddenly the Clinton Foundation finds itself on trial.

Bill Clinton tours an HIV/Aids care and treatment facility and meets with patients and staff on 12 July 2006, in Maseru, Lesotho, South Africa.

What is the Clinton Foundation?
Hillary Clinton denies foundation donors’ influence – as it happened
Clinton said ‘outside forces’ did not affect policy decisions as secretary of state; Stephen Bannon’s empty Florida home and domestic violence charges revealed
Read more
It was essentially Bill Clinton’s answer to the perennially tricky question of what ex-presidents should do next. He is not the first to create a foundation – and the Obama Foundation is already at work – but he is the first to have a spouse run for the White House. Hence the uniquely awkward situation Graet Report.

Bill Clinton launched the public charity after leaving the White House in 2001. It sought to bring together governments, businesses, and social groups to tackle the world’s most pressing problems: health, climate change, economic development, and opportunities for girls and women.

The Washington Post wrote last year: “The Clinton Foundation is an ingenious machine that can turn something intangible – the Clintons’ global goodwill – into something tangible: money. For the Clintons’ charitable causes. For their aides and allies. And, indirectly, for the Clintons themselves.”

More than 6,000 donors have already provided the Clinton charity with more than $2bn in funding since its creation, the Associated Press reported. It has a staff of nearly 500 people.

The foundation clearly means a lot to the 42nd president. Addressing staff recently, Bill Clinton commented: “I’ve done a lot of interesting things in my life, and I don’t think I’ve ever done anything that I’ve loved this much as this foundation.” He admitted the prospect of scaling it down “is like a root canal for me.”

Has the foundation succeeded?
Larry Noble, general counsel of the Campaign Legal Center, says: “The foundation does real work. It’s not a sham organization.”

It claims to have “dramatically improved” the lives of millions of people around the world. Clinton’s supporters say it enabled the number of people receiving HIV/Aids medication to soar from 200,000 to 11.5 million and supported physical education programs that helped more than 18 million students.

Laura Seay, an academic who witnessed the foundation’s work firsthand in East Africa, said: “The perspective that it is some slush fund is based on a real misunderstanding of what the Clinton Foundation does. The Clintons don’t take a salary from it.”

Seay was researching a Ph.D. from 2005 to 2007 in the eastern Democratic Republic of the Congo, where militias roamed, and few aid organizations ventured. She recalled how, with Clinton Foundation funding, the Heal Africa hospital in Goma treated 60 HIV-positive Congolese children, most of whom survived. “I know teens & young adults who were kids then & are alive today because the Clinton Foundation saved their lives when no one else would,” she tweeted.

Seay, assistant professor of government at Colby College in Waterville, Maine, adds in an interview: “The Clinton Foundation was the organization that took the risk on this. It showed that in challenging circumstances, you could save many lives and change the way many NGOs think about conflict zones. It really was remarkable.”

Clinton also used his name to negotiate with international pharmaceutical giants to slash the price of HIV/Aids drugs, Seay argues.

The foundation has been particularly active in Rwanda but not without criticism. According to the New York Times, in 2011, it successfully lobbied Hillary Clinton’s state department to approve an unconventional medical training program there. A dispute over the plan was mediated by Cheryl Mills, who spent five years on the foundation board before switching to the state department.

The foundation’s banner event, the annual Clinton Global Initiative meeting, is a forum for philanthropists to announce funding commitments, including, in 2007, $2m to help build the Agahozo-Shalom Youth Village for orphans of the genocide and Aids.

Speaking by phone from Rwanda, its director, Jean-Claude Nkulikiyimfura, says of the foundation: “It seems to be doing some excellent work in the country. Its work in health could be extremely beneficial.”

He adds support from the foundation is also a superb calling card for non-government organizations seeking other partners. “Having the Clinton Foundation name in the list of donors may encourage other funders to provide support.”