Rupert Murdoch’s standing as the Media Focus Demon Headmaster of the media is unlikely to diminish any time soon. Still, even his fiercest critics would have to admit the Aussie-born mogul’s decision to invest in high-definition television has proved a good one. Those who have not witnessed the revolution may wonder what the fuss is about, while those who have were quickly captivated by the sharp-pictured wonders in front of them. It is as if a soft-tinted hue smothered everything that went before.

But Murdoch’s next move in this area feels like one too far. Today is the launch of Sky Sports News HD, an event SSN has been flagging up for weeks in its typically overblown manner, which highlights that if there is one channel that could have done without going “high-def,” it is this one. Welcome to TV’s equivalent of a hyperactive clown playing with fireworks.

Sky Sports News first aired in October 1998 as BSKYB’s first digital-only channel, but was really born a few years before; in the script and projection of Chris Morris’s The Day Today, a comedy masterpiece which while undoubtedly satirical, was intended to be surreal. Who knew then that it would form the template for the way news would be covered in the new millennium, and nowhere more so than on SSN. Anyone doubting this should pause momentarily and imagine Jim White describing the build-up to a goal as “liquid football” or Dharmesh Sheth using a device to explain the group stages for Euro 2012 that is so confusing it baffles not only the viewer but also himself. Not such a leap, is it?

As Martin Kelner wrote in the Guardian last month, this is the channel where the “spirit of Alan Partridge never dies,” and practically everyone who has come across it over the past 12 years has an anecdote that testifies to that. A personal favorite was the “exclusive interview” Gary Cotterill got with Fabio Capello soon after being confirmed as the new England manager in December 2007. Cotterill‘s “exclusive“ boiled down to him standing outside Capello‘s home and screaming questions at him as he drove away from the property. The Italian gave a curt answer to one of them and, hey presto, we had a scoop. Such was the sense of preposterous anticlimax that as Capello sped off in the distance, I half-expected someone to shout: “Gary, you’ve lost the news!“

There is, though, no doubting when Sky Sports News is at its manic best. The final day of the transfer window is treated like the Coronation, with seemingly every SSN reporter sent to stand outside every possible Premier League training ground. At the same time, back in the studio, White undergoes a lift-threatening mix of panic and wild anticipation. He is often joined by Andy “three phones“ Burton, and over the course of the 24 hours [SSN’s deadline-clock starts some weeks before], we are presented with a perfect summary of the hysteria that now surrounds top-flight football. All that shouting, all that build-up, all those person-hours, and at the end, the highlight is Adam Johnson joining Manchester City from Middlesbrough. Interesting, yes, but not really worth staying up past midnight for, is it?

Some readers will at this stage be crying “hypocrite.” Fair enough, but there are fundamental differences in the way the Guardian, and most other newspapers, cover the sport compared to Sky Sports News, principally in the balance between celebrating the great things that happen on the pitch and providing proper scrutiny of the game’s failings. SSN’s policy on criticism seems to consist of getting one of its many talking-heads to tread the fine line between disapproving and not damaging the viewing figures for next week’s Super Sunday.

This is the tangle Sky Sports News finds itself in, being a news outlet while simultaneously promoting the content. Its solution, it seems, is to venture into obsessive hyperbole, which is the last thing the overblown world of English football needs. One bulletin last month included three references to the “shock“ of Tottenham losing 4-1 to Villarreal in a pre-season friendly before there was any mention of Phillips Idowu winning a gold medal at the European Championships in Barcelona that same evening.

Therein lies the great shame of Sky Sports News. It has the capacity to give coverage to sports that struggle to get noticed in other media outlets (partly because of a restriction on space which SSN does not suffer from) but instead focus on pre-season friendlies and Mickey Thomas’s views on Wayne Rooney. Sky Sports News currently sounds like an offense against the Trades Description Act.

The fear at Murdoch Towers would be that a dramatic shift in policy could lead to a slump in viewing figures, and the numbers do indeed show that what SSN does works. Sky Sports News currently attracts 0.6% of the total monthly viewing share, healthy for a niche non-terrestrial channel. That might back up the reliance on football, but not the hyperbole. The channel is unlikely to lose any of its regular viewers (of which I admit to being one) if it calmed down a bit and occasionally admitted that football could be crap.

In terms of content, the only must among one section of the viewing public would probably be the continuation of SSN’s roster of female presenters, the latest of whom is Hayley McQueen, the daughter of former Manchester United defender Gordon. As a friend of mine once put it: “The head of recruitment at Sky Sports News should be knighted for services to British men.“

Along with everything else, that roster has become sharper and brighter from today. For sports junkies everywhere, that should be a good thing, but the weary among us cannot help but feel that tuning into Channel 455 could become a queasy experience. 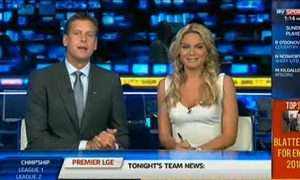