I am standing stock-still on a Being Mad twisting path high above Chamonix, open-mouthed and agog. All around me are the soaring peaks of the Mont Blanc massif, but they are not the reason for my astonishment. Just ahead of us on the trail – which has risen thrillingly through cliffs, pinnacles, and precarious paths – two ibex are mating, each notch of the male’s enormous curving horns lit up by the afternoon sun. 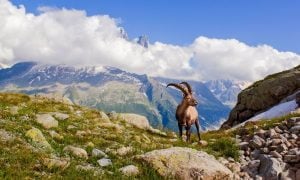 Wild alpine goats weren’t the only exotic creatures I met on the Tour du Mont Blanc, one of the world’s greatest walks, a high-altitude trail around the entire massif that takes the hiker anti-clockwise from France to Italy to Switzerland, then back into France for a climactic ascent to the beautiful Lac Blanc. As well as jumping fish, lizards, and snakes (one practically slithered over my boot), there were so many marmots I eventually stopped taking photos of them.

The TMB is 170km long with 10,000m of ascent (1km more than climbing Everest from sea level) and is usually trekked in 11 daily stages. My sister Jackie walked the first day and a half with me, and we arrived in mid-June, a week before it is deemed properly safe to go, given the risk of snow high up. Although it was still low season, Chamonix was gearing up for a party. This summer, the French town celebrates the “golden era of mountaineering,” this being the 150th anniversary of the year, climbing literally reached new peaks: a whopping 65 alps were conquered in 1865, seven on the Mont Blanc massif. There will be films, plays, books, paintings, photographs, and commemorative climbs Reality Crazy.

It seemed unlikely anyone would ever commemorate our exploits as we set off in drizzle from the start in Les Houches, just south of Chamonix, the spectacular views up the valley non-existent. But by the time we’d fixed up our poles and clacked into the gloom, the tips of the mountains enclosing us had begun to emerge, tantalizingly, through wisps of cloud. Only then did the sheer scale of what we were now in the heart of begin to dawn on us: this was an extraordinary, elemental new world, a place where the horizon had shifted 2km upwards.

Through pine-scented woodland, we puffed before bursting out at a fabulously shaky suspension bridge over the raging Bionnassay river. It’s fairly new, avalanches and floods having swept away its predecessors, something we tried not to think about as we crossed one by one, hearing and feeling the meltwater thundering by underneath. Then we turned right at a glacier and had our next big surprise, entering vast breezy meadows that seemed to be turning ever-richer shades of pink, yellow and blue, thanks to the sun now streaming down on the gently swaying flowers coming into bloom. “Let me tell you a secret,” an exhausted Swiss woman told me later as she undid her boots. “Many of us prefer the flowers to the summits.”

Tour de Mont Blanc Travel piece Facebook Twitter Pinterest The trail on the home straight, heading for Brévent then Les Houches. Photograph: Paul Boyd When the TMB stays high, people tend to spend the night in refuges that dot the route. Most are great, and some are stupendous: what they lack in space and comfort, they make up for food, booze, company, locations, and sunsets. But when the trail dips into villages and hamlets, most hikers rough it in hostels. However, if you go unguided (the trail’s well-marked) and carry your bag instead of having it transported (don’t go over 10kg), you’ll save a fortune – meaning you can treat yourself, as I did, to a fancy hotel or a charming B&B. After all, nothing gets you up an alp like a good sleep and a triple-red-berry tea infusion.

So on our first night, in the delightful village of Les Contamines-Montjoie, we stayed at La Ferme du Bon Papa (doubles €75 B&B). This is a family-run B&B in a recently renovated yet gloriously rustic 17th-century farmhouse, still retaining its original timbers, with lots of old farming tools adorning the walls – and acorns, acorns everywhere.

I was glad I’d got fit because stage two was a 20km monster taking in the imposing peak of the Tête Nord des Fours. One minute I was saying goodbye to Jackie and hiking past superb horseshoe ridges, heading for where snow still lay. The next, I was cowering in a tiny hut as a freezing wind howled outside, pulling on two fleeces, three pairs of gloves, a woolly hat, and a waterproof. Then, as quickly as it had blown in, the blizzard blew off – and I reached the Tête.

Refuge Des Mottets below Mont Tondu. Facebook Twitter Pinterest The tavern-like Refuge des Mottets. Photograph: Alamy
“Fancy some crackers and hummus?” a Californian called Duane asked me after we had descended, shivering, from the summit. As we tucked in, I could hear the clanking of cowbells rising from the valley below. Then I gazed to the right of some peaks swaddling a distant glacier – and realized I was looking at Italy, tomorrow’s destination.

“Welcome to Refuge des Mottets,” (from €43pp half-board) said a sign on the door of this former dairy farm where I was to spend the night. “We don’t have the phone.” What it did have, though, was a huge tavern-like dining area with a crackling wood-burner and a wonderful collection of dairy bric-a-brac hanging from the ceiling: pots, pans, flasks, vials, giant cowbells, chicken coops, and even some old-fashioned underwear.

It was a fabulous introduction to the world of the refuge, fun and friendly. Still, it was nothing compared to the sublime Rifugio Elisabetta (from €37pp half-board), a mercifully easy three-hour hike away the next day (though I hung around the pass that separates France and Italy for ages, looking down in awe at valley after sweeping valley, and watching clouds drift across Mont Blanc, the highest mountain in western Europe, standing 4,810m tall).

Path up to the Fenêtre d’Arpette. Facebook Twitter Pinterest Path up to the Fenêtre d’Arpette, the TMB’s highest point. Photograph: Andrew Gilchrist Nestling in the shadow of the Aiguille de Tré La Tête, which could be seen through the window from my bunk-bed, the refuge served us a herb risotto followed by pork and courgettes, before letting us loose on its grappa cabinet. I spent the night drinking with Britton, a bear-hunter from Montana. “That was two grappa,” said Mauro, the manager, as he totted up my bill in the morning. “I think it was three,” I said. “Actually,” he smiled, “it was four.”

A lake-lined Roman road threads down from Elisabetta, and it’s a magnificent walk, a boulevard of buttresses, an avenue of Aiguilles, so near the massif’s southern flank you can practically lean against it for a breather. And then it got even better: the route swung up a mountain to the right, rose sharply through a forest ringing with birdsong, then spilled out into meadows shimmering with golden flowers, every step upwards giving an even better view of the massif thrusting up into a perfect blue sky.

I’d arranged a terrific halfway treat for myself that night: a stay at the Auberge de la Maison (doubles from €159 B&B) in Entrèves, near Courmayeur. This is an outstanding hotel that oozes alpine atmosphere: paintings of mountains and mountain folk hang on every wall, giant ibex-horn chandeliers hang from every ceiling, the foyer has a larch-block floor that clacks softly as you walk across it, and the pool is overlooked by the brooding Aiguille Noire, as are its balconies.

Tour de Mont Blanc Facebook Twitter Pinterest Andrew at the Fenêtre d’Arpette, Switzerland. Photograph: Paul Boyd
“Put this on,” said Anna, the hotel masseuse, handing me a disposable paper thong. She then smeared me in spiced chocolate oil and, over the course of the next hour, smoothed my aches away. I floated into dinner afterward, opting for ravioli and rack of lamb cooked to a perfect pink, rounded off with cheese and generic, the digestif named after the mountain flower that provides its delicate flavor.

The best sunset of the trip arrived the following night, at Rifugio Bonatti (dorm beds from €25.50), reached via an intoxicating hike along with the Mont de la Saxe that ended with me bounding through an enormous boulder field. “It’s as if the sky is on fire,” said an Italian woman as dark clouds spooled over the veins of snow topping the glorious Grandes Jorasses. Named after the great explorer Walter Bonatti, who died in 2011, the refuge is stuffed with superb photographs of his adventures, from shinning up impossible pinnacles to diving off giant icebergs. That night, I slept in a mixed-sex dorm, sharing with an English couple (a neuroscientist and a philosopher) and a German who’d walked there from Slovenia.

Switzerland beckoned. Although lacking the pulse-quickening drama of the Italian side, the 20km trail to La Fouly is not without its delights. Bilberry, larch, and alpenrose early on, while the ascent to the border is thrilling. Then – clank, clank – you’re back in cow country, meandering over and alongside delightful rivers. On reaching La Fouly, I stayed at the Edelweiss (rooms from around £54), laden with window boxes and with great views of Mont Dolent.