A dramatic call for a new health and care tax has been made by a former Tory health minister, amid demands by MPs of all parties for Theresa May to act to save the NHS and the social care system from collapse.

Dr Dan Poulter, who stepped down from the Department of Health last year and now works both as an MP and as a part-time NHS doctor, said his experience inside hospitals had convinced him that radical, long-term funding solutions for the health and care sectors are “urgently required”. 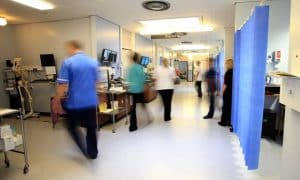 Analysis The NHS secret is out. And local communities won’t like it
The government must now prepare for serious scrutiny and major political battles. They could be the least of its problems

He told the Observer: “On the hospital wards I often see people who are medically fit to go home, but who are forced to stay in hospital because of difficulties arranging their social care package or because of a lack of appropriate housing. Good healthcare cannot be delivered without properly funded social care.

“A long-term plan to ensure a properly funded and sustainable health and social care system is urgently required, and I believe a health and care tax – perhaps introduced through raising national insurance – offers one of the simplest ways forward.”

Poulter spoke out amid growing frustration about a lack of clarity in the government’s approach to social care and how to fund it, as the number of elderly people soars and pressures on hospital services mount. In the Tory manifesto last year, former prime minister David Cameron promised to introduce a cap of £72,000 on the care costs for each individual, after which the state would pay. But soon after polling day, he delayed the scheme’s introduction until 2020, because money was not available.

Poulter, who was responsible for steering the plan for a cap through parliament, said that with public finances unlikely to improve, the much-vaunted policy had little chance of being implemented: “Given that the introduction of a cap was considered unaffordable a year ago, and that the costs of social care continue to increase, there is now little prospect of the cap being introduced at all.” What the NHS and care systems need, he said, is a special tax that will guarantee an income stream, rather than policies like the cap which are entirely dependent on the economic climate of the moment.

“Linking tax income with health and care spending would give people the opportunity to see how their money is being spent, and allow a legitimate debate about what is an appropriate level of taxation required to ensure a sustainable funding settlement for our NHS and social care system in the years ahead,” Poulter said.

Echoing his call for a new approach from government that would offer long-term security of funding, Richard Murray, director of policy at health thinktank the King’s Fund, said: “Tackling the growing crisis in social care will be a key test of the prime minister’s promise of a country that works for everyone, and must move much higher up the government’s agenda.

Dr Dan Poulter
Facebook Twitter Pinterest
Dr Dan Poulter stepped down from the Department of Health last year. Photograph: Felix Clay for the Guardian
“England remains one of the few major advanced countries that has not reformed the way it funds long-term care in response to the needs of an ageing population. A frank and open debate is needed on how to fund health and social care on a sustainable basis into the future, recognising that a long-term strategy will exceed the lifetime of a single parliament. With many people facing real problems in paying for social care right now, this is not something that can be put off any longer.’’

The calls for action came as May prepared to chair her first cabinet meeting since the summer break at Chequers on Wednesday. Downing Street officials said that while the challenges of how to make a success of Brexit would top the agenda, social policies including the challenges for the NHS would also be discussed.

Last week the Guardian revealed that NHS bosses were drawing up plans for hospital closures, cutbacks and radical changes to the way healthcare is delivered in an attempt to meet spiralling demand and plug the hole in its finances. Without the cuts the NHS at local level would face a financial shortfall of about £20bn by 2020-21.

Lib Dem MP Norman Lamb, who was also a health minister in the coalition government, said it was a disgrace that ministers had postponed the care cap on the grounds of cost, yet maintained it would still be introduced in four years’ time. The Department of Health maintained it was still committed to the care cap, despite a widespread belief in the sector that the plan is dead.

“This government is committed to ensuring that those in old age can access care that is both affordable and dignified. The position on the care cost cap hasn’t changed,” a spokesperson said.

Vicky McDermott, chair of the Care and Support Alliance, which represents 80 of Britain’s leading charities campaigning for a properly funded care system, said the crises hitting the NHS and social care were inextricably linked and needed a long-term solution.

“The government needs to get to grips with the scale of the social care crisis. The reality is that at least a million people aren’t getting the basic care they need. One million hospital days were lost to delayed discharge in 2015, costing the NHS £2.4bn, and it’s estimated that the money spent by the NHS on excess bed days due to people awaiting homecare could fund 5.2 million hours of homecare. The latest figures show that at least £1bn is needed for social care this year – just to keep things as they are,” she said

Last year’s Conservative manifesto pledged an extra £8bn a year for the NHS by the end of this parliament, as demanded by the NHS chief executive, Simon Stevens, in his 2014 “five-year forward view”. But Stevens made clear that was the minimum money required, and radical reforms to the way healthcare is delivered would also be necessary to make the NHS hit its budgets.