Migrant laborers in Qatar who worked for a company co-owned by Balfour Beatty, one of Britain’s largest construction firms, have claimed they were subject to continued abuse and exploitation for almost three months after the Guardian revealed their plight. 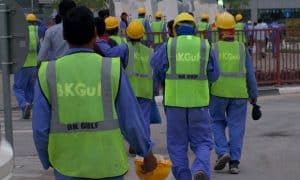 The Nepalese men, who worked for BK Gulf, which is 49% owned by Balfour Beatty, said they were forced to remain in Qatar against their will and were not paid for more than three months Web list Posting.

Balfour Beatty and Interserve accused of migrant worker labor abuses in Qatar
The workers were employed by Ethel Trading and Contracting (ETC), a labor supply company, but worked for BK Gulf on Qatar’s national museum.

Following repeated attempts to contact ETC, the company confirmed that it had sent the 18 men back to Nepal earlier this month. However, ETC declined to elaborate, and it is unclear whether the men received their unpaid wages before returning to Nepal.

“All of us Nepalese want to return home,” said one member of the group, speaking from Qatar earlier this month. “[The company] keeps asking me to postpone it. I will get problems with the police if I stay here once my visa runs out this week. They say the boss will come and pay us tomorrow. We’re in big trouble and need help to get out of here.”

A view of the national museum of Qatar.

Summary show
Under Qatari law, almost all foreign workers need their employer’s permission to leave.
Prem Bahadur Tamang left, alongside fellow workers in his labor camp in Qatar.
A foreign worker climbs scaffolding at al-Wakrah stadium, which is being built for the 2022 World Cup.
ETC did not respond to requests for comment, except to confirm the men had returned to Nepal.

Under Qatari law, almost all foreign workers need their employer’s permission to leave.

Another worker said: “After the [Guardian] report, BK Gulf told ETC to pay us on time … but after a month, everything went back to the way it was before.”

The men said they continued to live in cramped, unhygienic accommodation. “There is no piped water, and the water tank has a thick layer of algae,” added the worker.

Another laborer said a fellow worker’s wife was sick, and a relative had died, but he was not allowed to leave. “Our company doesn’t care about Nepalese,” he said.

One of the group, Prem Bahadur Tamang, was sent back to Nepal in June after organizing a strike to demand their salaries. Still, Tamang says ETC refused to pay his bonus and leave allowance, or buy his air ticket home, all statutory requirements under Qatar’s labor laws once a contract is completed.

“It’s definitely forced labor because we took a loan to come here, and we have to pay off the interest, so we’re compelled to earn money. We feel trapped,” said Tamang, speaking in Nepal’s capital, Kathmandu.

Mustafa Qadri, an expert on migrant workers’ rights in Qatar, said: “The fact that workers continue to live in the same poor conditions and have not even been allowed to leave Qatar despite the passage of four months since the story was first made public raises serious questions about the willingness or ability of both the company and the Qatari authorities to respect basic labor standards.”

Prem Bahadur Tamang left, alongside fellow workers in his labor camp in Qatar.

“More recently, in August, following our continuous proactive approach to ensure our standards are being met, we terminated our contracts with a labor supply company who failed to pay their workforce. BK Gulf WLL paid all monies due to the company on time and following the contract.

“BK Gulf WLL will not work with companies who do not meet its standards. The company will continue to enforce these standards.”

Balfour Beatty told the Guardian in April that BK Gulf “provides conditions for its workforce which go over and above local regulations and laws.” It said BK Gulf actively monitors the labor supply companies it uses.

The company insisted that employers only hold workers’ passports for safekeeping, and workers can access them when they need to. The company also claimed that all employees are paid through the wage protection system (WPS) “on time, without fail.”

However, the Nepalese workers have accused ETC of abusing the WPS, one of Qatar’s flagship labor reforms, which requires employers to pay their workers directly into their bank accounts. “Our bank cards were made six months ago … but the company hasn’t given them to us yet,” said one worker. “They keep the cards and then pay us in cash.”

A foreign worker climbs scaffolding at al-Wakrah stadium, which is being built for the 2022 World Cup.

The men also said their passports were confiscated on arrival in Qatar. “We wouldn’t be as helpless if we had our passports,” explained the same worker. “The driver who picked us up at the airport took our passports and contract papers. They made us sign something in Arabic and English. We didn’t understand it, but it turns out they’d made us sign a document with a lower salary.”

According to one contract seen by the Guardian, the men were promised a total monthly salary of 1,200 riyals (£240). Most said they are being paid only 900 riyals. The men said the low wages and irregular payments had left them struggling to repay the huge debts they accrued to secure the jobs in Qatar.

ETC did not respond to requests for comment, except to confirm the men had returned to Nepal.