France’s political row over the burkini continued to rage on Friday, as the French right stepped up its call for the garment to be outlawed nationwide despite a decision by the country’s highest administrative court to suspend a ban in one Riviera coastal town.

In a ruling that the government had hoped would calm the growing controversy, the state council suspended a decree against full-body swimsuits issued by the mayor of Villeneuve-Loubet on the Côte d’Azur. The suspension is likely to set a legal precedent for the 30 other towns that have banned the swimwear on their beaches in the past month.

Reactions as burkini ban are suspended: ‘It doesn’t change anything’ But the French right, led by the former president Nicolas Sarkozy, stepped up its calls for a complete nationwide ban on burkinis, and at least three mayors refused to withdraw their bans. 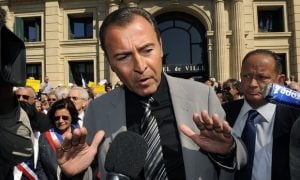 The state council ruled that the mayor of Villeneuve-Loubet did not have the right to ban burkinis. The court found that the anti-burkini decrees were “a serious and manifestly illegal attack on fundamental freedoms,” including the right to move around in public and the freedom of conscience. The judges stated that local authorities could only restrict individual liberties if there were a “proven risk” to public order. It ruled that a proven public order risk had not been demonstrated.

Sadness, anger, and fear: how Nice is responding to the burkini ban Read more Crucially. The judges ruled that without any risk to public order, “the emotion and the concerns arising from terrorist attacks,” especially the attack in Nice on 14 July. A lorry driver killed 86, were “not sufficient to justify a ban legally.”

Villeneuve-Loubet, where locals and police told media they had only seen one or two burkinis in the past two months, will have to withdraw its ban immediately. Its hardline rightwing mayor, Lionnel Luca, who is close to Sarkozy, said the court ruling was a boost to what he called the “rampant Islamisation [that] is progressing in our country.” “Far from calming, this decision can only heighten passions and tensions, with the risk of trouble we wanted to avoid,” he said.

Mayors in the other 30 coastal resorts that have banned burkinis – mainly on the Côte d’Azur – will now have to make their own decision whether to withdraw the decrees. They could keep their bans in place and risk being forced to suspend them by local courts or face further legal action from human rights groups.

Ange-Pierre Vivoni, a Socialist mayor in Sisco in northern Corsica, said he would not withdraw his ban. “Here, the tension is very, very, very strong, and I won’t withdraw it,” he told BFMTV. He issued his burkini ban on 13 August after a skirmish between villagers and Muslim families on a beach, but an ongoing investigation suggested no burkini was involved.

After reports of some women being stopped by police for simply wearing a headscarf and loose clothing, criticism had grown from French rights groups who warned of the lasting impact of the bans.

Michel Tubiana, the honorary president of the French Human Rights League, one of the groups that brought the test case, said that the burkini row had left a mark on society despite the ruling. The ruling, unfortunately,” did not resolve everything because “the public humiliation of women” and “the political oneupmanship” over stigmatizing people for their religion had cut deep.

Tubiana criticized the Socialist prime minister, Manuel Valls, who had supported the mayors who banned burkinis, and Sarkozy, who called the burkini a “provocation,” as well as Marine Le Pen’s far-right Front National, which is now calling for a complete ban on all religious symbols – including veils or turbans – from all public spaces.

Tubiana said the burkini row “will leave traces and scars in society,” and the ruling was a reminder of the law for politicians who had stoked tensions in society and “poured oil on the fire and in that I include the prime minister and the former president.”

The controversy has become the focus of the battle for the presidency in 2017. Sarkozy, seeking his party’s nomination to run for president, is leading the charge against full-body swimwear and seeking to ban Muslim headscarves from universities and private companies.

The left is bitterly divided on the matter: the prime minister has supported the mayors who issued anti-burkini decrees while the feminist education minister and the health minister warning of a dangerous unleashing of racist rhetoric and stigmatization.

The president, François Hollande, appears to have sat on the fence – saying on Thursday only that life in France “supposes that everyone sticks to the rules and that there is neither provocation nor stigmatization.”

The first short-term burkini ban was issued in Cannes at the end of July, after the murder of a priest in Normandy, claimed by two attackers who proclaimed allegiance to the Islamic State and the terrorist attack on Nice.

Many of the bans are due to expire in the next couple of weeks. They do not explicitly use the word burkini but instead ban “beachwear which ostentatiously displays religious affiliation,” citing reasons such as the need to protect public order, hygiene, or French laws on secularism.

At the heart of the row is the French principle of laïcité – secularism – and accusations that politicians are twisting and distorting this principle for political gain and using it to target Muslims Web Posting Mart.

The French republic is built on a strict separation of church and state, intended to foster all private beliefs. In theory, the state is neutral in terms of religion and allows everyone the freedom to practice their faith as long as there is no threat to public order.