So. Most of us have arrived in Falmouth,  Atticus Blog this Saturday night before our first event on Sunday: some by train, some by plane, and some still on the road southwards in the tour bus. It’s a gorgeous, warm evening in the Greenbank Hotel right on Falmouth’s harbourfront where, we’re pleased to be told, Kenneth Grahame came in 1906 to write The Wind in the Willows. Outside on the terrace, we hear oddly displacing eastern music drifting over the harbor from this weekend’s sea shanty festival and see the lights of settling boats murmuring to the sleepy waters. Some of us find the bar and order fish and chips while watching Portugal v Austria; the non-footie personnel eat in the restaurant and avoid the howls at Ronaldo’s missed penalty (justice for sneering at Iceland). 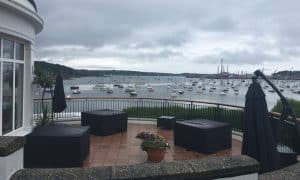 ‘No drugs on the bus’: Carol Ann Duffy takes a road trip I’ll be sharing this tour diary with my fellow poets; but also on tour are Picador’s Camilla Elworthy, tour organizer, patron saint of publicists and bon viveur; Helen Taylor, legendary gig organizer and soother of stress; and the Edinburgh multi-instrumentalist John Sampson, master of ceremonies on stage, and soundcheck maestro. For each performance, we’ll be joined by a poet especially associated with our location. Tomorrow, the poet will be Penelope Shuttle; but for now, a nightcap during which I demonstrate one of the magic card tricks I’ve learned for these midsummer hours on the road. General amazement and incredulity all-round … and so to bed.

Sunday is a rainy, windy, seagull-heckling day – but the Princess Pavilion has a full house as we peep out from backstage, pasty-faced with nerves. Ron Johns, the proprietor of the Falmouth Bookseller, presides over a tempting table of poetry books, and then, with a blast and a flourish from Sampson’s posthorn, the tour is off. Gillian Clarke and Jackie Kay (an outgoing and an incoming laureate) share the first half with Penny Shuttle. Gillian – who else could? – opens the event, silver-haired in the darkness. As she reads, her beautiful Anglo-Welsh voice filling the space, the theatre gathers its silence and leans in towards her. Penny’s welcome from her home crowd is hot, and the rest of us crowd together in the wings to listen and learn. Her poem Filth, satirical and hilarious, has the audience in fits. Her elegy for her late husband, the poet Peter Redgrove, The Repose of Baghdad, has some people in tears. As I shall henceforth refer to Jackie, the makar draws cheers and foot-stomping with her poem Extinction, which she tells us was called in its first draft Planet Farage. This audience, I deduce as I listen to the makar, does not love Ukip. As she reads on, there is an exchange of compassion and understanding over the footlights. Something extraordinary is happening.

Imtiaz Dharker (if there were to be a world laureate, it would be her) and I share the second half. Before we know it, we are all behind the book-signing table, like speed-daters, meeting our wonderful first audience. Sometimes at poetry readings, it’s possible to take the pulse of how people who love poetry feel. Today, the air seems bruised with hurt – perhaps because of Orlando, or the murder of Jo Cox, or the gathering tsunami of the referendum. At this moment, these events seem linked, at least in the public hurt shared by the hundreds here. And although we poets have no agenda – I am reading poems written 30 years ago – the poetry has been live-wired to this present and this public. Later, our taxi driver robustly declaims his reasons for leaving the EU as he drives us to supper, hooting his horn at anything in his way. He drops us off at the fabulous Stable restaurant for pies and cider, then roars off like Toad, who, of course, would have voted Brexit. I have a new game for tomorrow’s journey to bathe.