Summary show
Three people have been killed in an attack involving a crossbow in Toronto on Thursday.
An unidentified man, 35, was taken into custody, police said.

Three people have been killed in an attack involving a crossbow in Toronto on Thursday.

A man was taken into custody, and police later evacuated a building over a suspicious package in a related incident, Detective Mike Carbone said, without giving further details.

In the initial incident, police responding to a stabbing report to find three people who appeared to have been injured by crossbow bolts, said police spokesman David Hopkinson. Two men and a woman were pronounced dead. 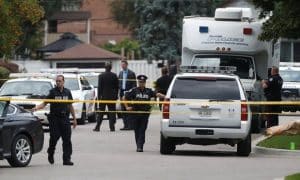 “We don’t have any idea with regards to why this may have happened,” said Hopkinson. CTV News, citing emergency services, said two other people were seriously injured.

An unidentified man, 35, was taken into custody, police said.

In 2010, a man shot his father in the back with a crossbow in a Toronto public library before smashing his skull with a hammer. Zhou Fang, who had suffered domestic abuse, was convicted of a lesser charge of second-degree murder.