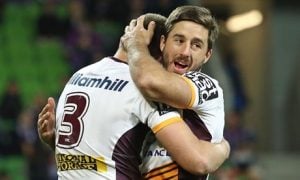 Cronulla has re-ignited hopes of a maiden premiership with a resounding 37-12 home win over the Sydney Roosters. Down 12-0 after just 20 minutes, the Sharks scored 37 unanswered points on Saturday night to snap their four-game winless streak in style and remain in contention for the minor premiership, The Haze.

Broncos stun Melbourne Storm to keep their NRL top-four hopes alive In a grandstand finish to the regular season, Cronulla faces off against ladder leaders Melbourne in a top-of-the-table clash next Saturday at AAMI Stadium for the right to lift the JJ Giltinan Shield.

A crowd of 14,457 fans farewelled retiring hooker Michael Ennis at Southern Cross Group Stadium, lit up by a timely second-half onslaught from its team.

Fullback Ben Barba scored a try and set up another in a strong performance, while skipper Paul Gallen also crossed the line and came through unscathed in his 60-minute return from a calf injury.

Summary show
Ennis capped off the performance with a penalty goal late in the match.
Jarryd Hayne playing for Gold Coast
Raiders v Sea Eagles
Losing Sezer would be another significant blow for the Raiders.

Ennis capped off the performance with a penalty goal late in the match.

The Roosters’ loss ended their mini late-season resurgence and was compounded by an ACL injury to forward Sio Siua Taukeihaho in just the second minute of the match.

Despite the early injury setback, the Roosters stunned the hosts by trying to Connor Watson and Latrell Mitchell inside the game’s opening quarter.

However, an opportunistic Matt Prior pulled one back for Cronulla in the 25th minute before Barba similarly leveled the game with a cutting run to score in the 37th minute.

James Maloney then wobbled over a 35-meter field goal on the last play of the first half to give his team an unlikely 13-12 lead. From there, it was all the Sharks, with Gerard Beale, Jayson Bukuya, and Valentine Holmes all making the most of a 26-5 advantage in red zone plays to canter to their 17th win of the year.

Penrith’s Matt Moylan has kicked a match-winning field goal two minutes from full-time to give the Panthers a 15-14 victory over Gold Coast and confirm a berth in the playoffs.

The Titans, coming back to level at 14-14 on Saturday evening after trailing 14-0 at halftime, will need to beat North Queensland next week or rely on other results to finish in the top eight.

The game, played in front of 18,288 fans at Cbus Super Stadium, seemed to be heading into the golden point when Tyrone Roberts kicked a penalty goal four minutes from time, after a high tackle from Penrith’s Chris Grevsmuhl on Ryan James.

But Tyrone Peachey made a line break, bringing the ball to within 20m of the toy line, and Panthers, skipper Moylan coolly split the uprights for a one-pointer to snatch the game.

The pre-game focus was on Jarryd Hayne’s first match at fullback for two years, but he was outshone by his opposite number Moylan who scored the Panthers’ first try.

In the eighth minute, Moylan received the ball and cut inside off his right foot, racing past some flat-footed Titans defenders before touching down to the right of the posts.

The lead was doubled in the 17th minute when, after Bryce Cartwright broke the line and was tackled by Hayne 10 meters out, the Panthers quickly spread it wide, and Waqa Blake dived over.

Nathan Cleary, who edged the battle of two possible future opposing State of Origin halfbacks with Ash Taylor, added a penalty to his two conversions to extend the lead to 14 points.

Hayne had a chance to score the first try of his NRL return, three minutes before the break, when bursting towards the line after an offload from Leivahu Pulu, but the Panthers’ No1 stopped him 10 meters out.

Five minutes after the break, the Titans were back in it when Pulu was fed by Greg Bird five meters out, and he carried three defenders with him over the line for his first NRL try.

Then Bird, bandaged after a first-half head clash with James Fisher-Harris, set up a dramatic finish when he stretched out over the line, despite the efforts of Moylan and Peter Wallace, to make it a two-point game.

Earlier, Joey Leilua and Jordan Rapana kept Canberra’s hunt for a top-two finals spot by leading a Blake Austin-less Raiders to a 44-30 win over Manly.

Canberra’s Aidan Sezer left the field late with a shoulder injury as the Raiders survived a late Sea Eagles comeback at Brookvale Oval.

Canberra led 18-10 at the break thanks to two tries by Rapana, then two four-pointers to Leilua soon after halftime put the visitors well on track for their ninth straight win.

Rapana scored three tries overall, as did Manly’s Tom Trbojevic. Sam Williams filled in capably for Austin – who is out indefinitely due to a hand injury – alongside Sezer in the Raiders’ halves in the eight-tries-to-six win.

Losing Sezer would be another significant blow for the Raiders.

Melbourne has already cemented a top-two spot. Whether Canberra or Cronulla will join them in hosting a home qualifying final in the first week of the playoffs will likely be decided in next week’s matches. Wests Tigers host Canberra at Leichhardt, while Cronulla travels to Melbourne.

Soft defense from Manly allowed Paul Vaughan to score the game’s first try in the 10th minute. Rapana followed that up eight minutes later for a 12-0 lead. The Trbojevic brothers then combined to get Manly back in the game. Jake Trbojevic scored after Jack Wighton spilled a Matt Wright bomb. Tom Trbojevic then crossed out wide to peg the Raiders’ lead to just two points.

Rapana’s second try two minutes before the break gave the Raiders a 18-10 lead at the break. Edrick Lee and Jack Wighton also scored for the Raiders after halftime. Rapana’s third try with a minute to go sealed the win, but only after second-half tries to Tom Trbojevic (two), Daly Cherry-Evans and Frank Winterstein gave Manly a hope of an upset win.